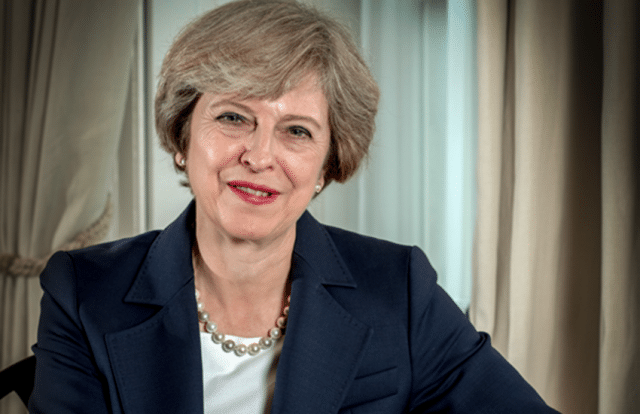 UK Prime Minister Theresa May has defied her allies in the DUP by saying she supports marriage equality in Northern Ireland.

Conservative leader May had to do a deal with the Democratic Unionist Party after failing to win an outright majority in June’s UK election. But the DUP opposes abortion and LGBTI equality and has blocked attempts to allow same-sex marriage in Northern Ireland.

May tackled the issue while hosting a post-Pride reception at Number 10 this afternoon for LGBTI people.

She said: ‘I know there is concern about the arrangement we have made with the DUP.

There the DUP has used the rules of the assembly to veto same-sex marriage.

‘If those votes were today, I would vote differently.’

May praised LGBTI campaigners as she noted it was a symbolic year for gay British people. Next week marks the 50th anniversary of the partial decriminalization of homosexuality in England and Wales.

And she highlighted her own mixed voting record on LGBTI equality. Before she became responsible for equality under previous Conservative leader David Cameron, May voted against the LGBTI community.

She said: ‘I have changed my own mind. If those votes were today, I would vote differently.’

And in 2013, May voted for marriage equality.

She said: ‘Equal marriage will be one of the proudest legacies of my party’s time in government.’

May pledged to campaign for LGBTI rights across the Commonwealth. And she said the UK had made it clear to the Russian government that the anti-gay purge in Chechnya ‘shamed’ them.

She also said she was looking forward to the government updating the Gender Recognition Act. She said this would make gender recognition ‘less medical’ and ‘less intrusive’ for trans people.