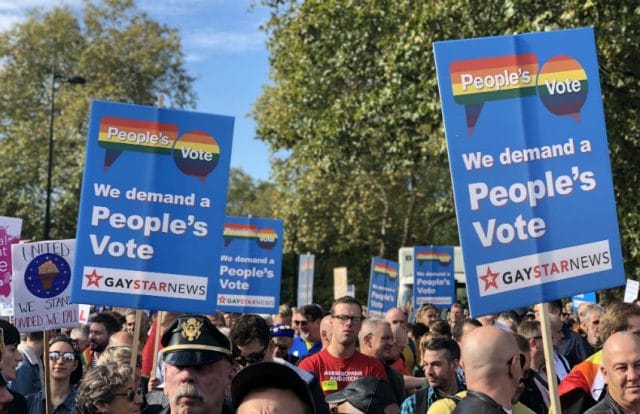 Prime Minister Theresa May has shown there is an opportunity for a People’s Vote on Brexit.

The Conservative leader has said they have ‘one last chance’ to deliver after numerous failed attempts to exit the European Union.

MPs will also get a vote on whether to hold another referendum, she said in Parliament moments ago (21 May).

However, they must also back her EU Withdrawal Agreement Bill.

The bill also includes the Irish backstop as well as a customs ‘compromise’.

If MPs reject the bill, May warned a negotiated exit would be ‘dead in the water’ and Brexit could be stopped.

The bill comes after what is thought to be the largest protest in British history.

Over 1.2 million people came out to march in London against Brexit in March.

The march came as a result of years of mishandling Brexit by Theresa May and the Conservative government. The Prime Minister has attempted to put her much-maligned deal through Parliament several times. Every time it was defeated by large margins by both Remain and Brexit supporting members.

If the deal is not passed, the UK faces crashing out of the European Union with no deal. Many experts warned that a no deal could result in food and medicine shortages across the country.

This could spell widespread disaster for the LGBTI community.

Thursday is also the European Elections.

On 23 May, voters across the European Union will be asked to vote for MEPs to represent them in the European Parliament. This is particularly important for LGBTI voters, as the rise of far right parties poses a direct threat to the lives of the community.

If you are a British, EU or Commonwealth citizen living in the UK, you can . It’s a simple form that only takes a couple of minutes. You’ll need a copy of your passport if you’re living abroad.

Tris Reid-Smith, Editor-in-Chief at Gay Star News and organizer of LGBT+ for a People’s Vote is urging LGBTI people across Europe to vote to protect their lives.

He said: ‘The European Elections are more important to LGBTI people and our friends, families and allies than ever before. We urgently need to turn out in huge numbers to stop the far-right parties who are hoping to benefit from our apathy.

‘The risk they pose is growing – but together we can defeat them.’