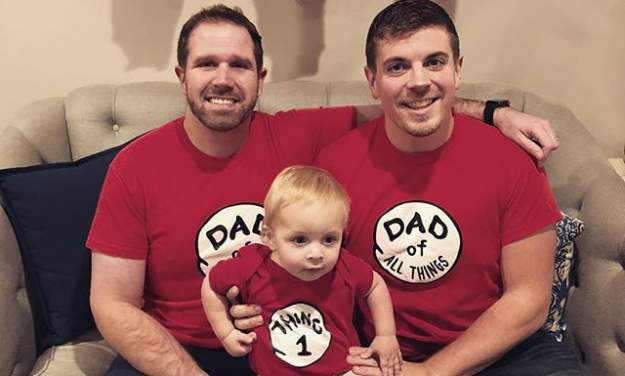 Jason Babcock and Adam Gentile are the happy couple who just announced that they are adding three more to their quickly growing family.

As GayStarNews reports, the two met at a college before getting married in Massachusetts on July 2013.

Then, they introduced their newborn son, Tristan, to the world just last year in January. Tristan was brought into their lives thanks to the help of their friend Jessica who agreed to be the surrogate.

But Jessica’s generosity didn’t stop there. She later told the boys that she was willing to be a surrogate for them again. Shortly after, the three had embryos fertilized and implanted again.

But, maybe Jessica is getting more than she signed up for, as now she’s going from birthing one child to birthing three at once!

That’s right, the three have found out that Jessica will be giving birth to triplets this time. Despite what a large surprise that announcement is, it’s also something to celebrate with glee.

And how did Jason and Adam celebrate? By announcing the triplets in an adorable Dr. Seuss inspired Instagram post, which you can see down below.

“We are extremely excited to announce that our family is growing exponentially,” Babcock wrote in the caption. “We are expecting triplets come May 2018! It’ll be a full house of laughter, love, and craziness!”

In all of the said craziness, the couple has remembered to be eternally grateful to their friend Jessica for helping them have a family.

“She is an angel, a blessing, just the best,” Babcock told GSN, “She does it simply because she believes we deserve a family the way anyone else does.”