Home Gay Life These Haunting Photos Show The Strength Of Orlando Before & After Pulse... 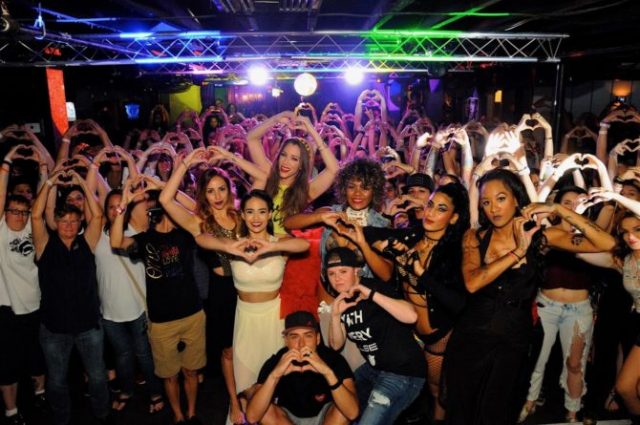 Today is Orlando Pride. To mark the special occasion, Queerty asked Orlando lesbian transgender photographer Melody Maia Monet to share a sampling of her amazing photos of the local LGBTQ community along with captions, taken before and after the Pulse Nightclub massacre of June 12, 2016, in which 49 souls were lost. Before: MarcoMarco Party at Pulse The place to be on Sunday the hours before heading home for the night.

Before: Girls in Wonderland The lesbian event during Gay Days. Here are the ladies who love ladies at House of Blues in June of 2016 one week before the tragedy. Mural memorializing the tragedy, painted on the side of the LGBT center in the Mills 50 district. Photographed July 2016. The men of Flex Fridays at the club Southern Nights Orlando, showing love for Pulse on June 17, 2016. The girls at Southern Nights Orlando show their love June 18 2016. A September benefit at The Abbey. The hood of the #49 police car lists the names of the 49 Pulse victims. Massacre survivors at the Abbey benefit in September. Crowds gather to catch beads thrown from floats during Come Out With Pride in October 2015. Melody Maia Monet is transgender woman and lesbian living in Orlando, Florida. She is also a professional writer, photographer, singer, and YouTube personality. She writes an opinion column for Watermark, the LGBT magazine of Orlando, which you can find at www.watermarkonline.com. Her photography website is monetphoto.com, her band maintains a website at madtransitband.com, and her YouTube channel is youtube.com/user/melodymaia. She can be reached by email at monet@alumni.princeton.edu.