Two men were called gay on the receipt of their Little Caesars pizza.

WTVR reports that two cousins had spent about 15 minutes waiting for their food from the Herico County, Virginia restaurant. When they were on their way out, they noticed a word printed on their receipt. In place of the customer’s name, their receipt said the word “gay.”

“I was baffled, and it made me semi-angry because I feel like it’s 2019 and we’re still having to deal with this,” said Rosman Harris.

Harris and his cousin Marcus Robertson, say that the cashier never asked for their names. But they noted how the customers before and after were asked for theirs.

The two men say that despite both being gay, the fact was never shared with the fast food restaurant’s employees.

“It was this preconceived notion of, ‘Oh, these are gay men.’ So, why would you write that on the ticket? I’m not understanding that,” Harris complained. 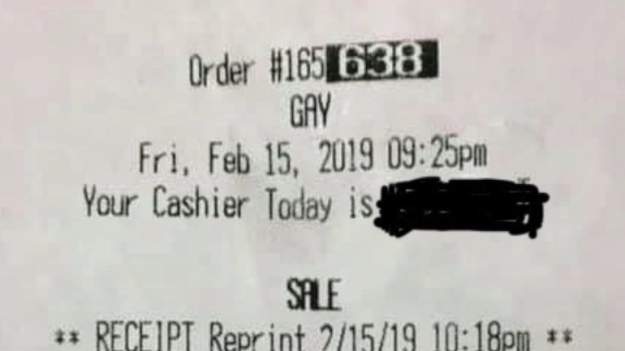 After seeing the message, the two went back to the restaurant to seek answers. They questioned the manager on why the word was on the receipt, but he never responded. Instead, the manager told the two that the cashier couldn’t be fired while the store was short-staffed.

The two share that they later returned to the restaurant a few days later to find the same cashier as before.

“She said, ‘Well, oh, he was being loud, he was being rude.’ So, my cousin was, like, ‘No, he wasn’t being loud or rude. He’s hearing impaired, so when he talked loud that’s for him to hear himself speak,'” said Robertson.

By this past Monday, the two cousins learned that the cashier had been fired. After hearing that news, the cousins hope that the Little Caesars will do a better job of training its employees.

“Because for something like this to happen, not only does it impact your business, it impacts your image as well,” said Robertson.

Still, the cousins say they never received an apology from the restaurant and are considering legal action.