Home Gay Life These Students Say Their School Has Become More Hostile After A Photo... 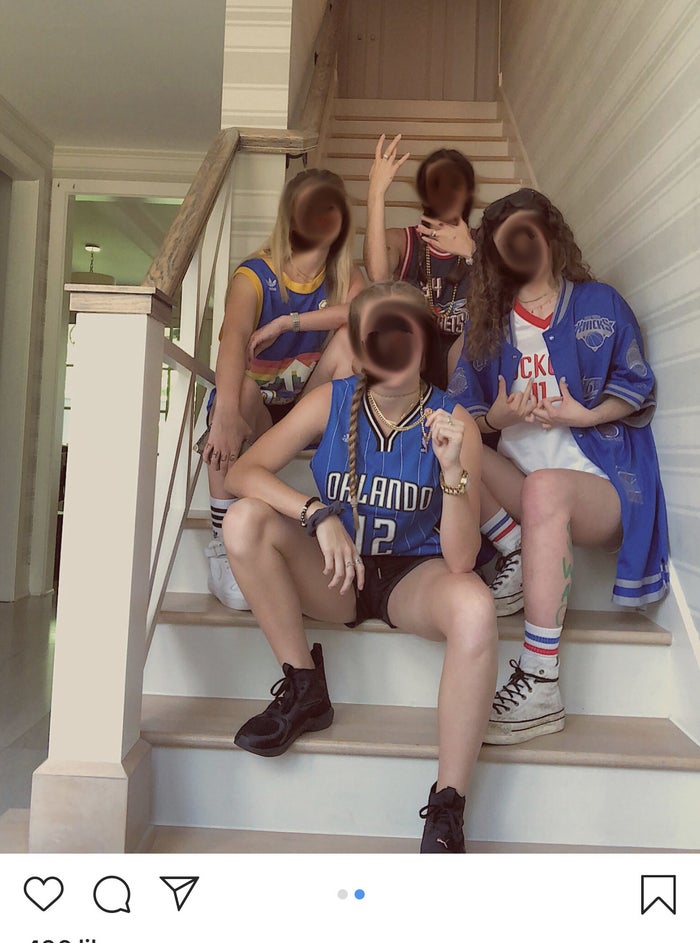 Students at Memorial High School in Houston say tensions among their classmates have only escalated after social media photos of students posing for a themed dress-up day went viral over the past week.

Several junior and senior class students told BuzzFeed News that they’ve been hesitant and scared to speak out about what they saw at the school’s annual «jersey day» tradition.

They say they observed a handful of mostly white students calling the day «thug day,» and said their classmates came to school in cornrows, du-rags, and basketball jerseys and were flashing gang signs.

This year, after one student publicly criticized her classmates, students say it has just made the tensions at the school even worse.

BuzzFeed News has learned that both the student who originally tweeted the photos and the students in the viral photos are being threatened, doxed, and harassed online and at school.

“‘Racism isn’t a problem anymore’… right alright,” she captioned them.

Goodwin told BuzzFeed News she posted her classmates’ images to call attention to what she felt was a long-standing «offensive» interpretation of a school spirit day.

«From as early as 2015, the kids have been dressing up in offensive costumes,» she said. «The kids wear du-rags and cornrows to be ‘thuggish’ but those things are not thuggish. They are cultural and part of people’s everyday life.»

While she remains hopeful that her tweet can «finally change things» and bring accountability and social awareness to her school, the conversation has mostly devolved into hyper-personal and violent back-and-forth attacks.

Fellow students have messaged her telling her she’s endangering the lives of the white students she’s criticizing, and threatening her to pull her tweet. One person even posted her home address online.

Goodwin said Memorial High School officials allowed her to stay home for the remainder of last week after she received a slew of death threats. She said she has not felt safe enough to return to school since her tweet went viral.

Senior Alexis Ofori, who estimates that she’s one of 50 black students total at Memorial High School, told BuzzFeed News she was «pissed» when she observed her nonblack classmates dressing like this last year.

This is the first year the 18-year-old is speaking out openly, and she was tentative and careful about her choice of words.

«I was upset last year too [but] I thought I should keep my mouth shut ’cause I’m the only black kid and I didn’t want to cause anything,» said Ofori. She added that her parents advised against it for fear that she’d put herself «in danger.»

Ofori stressed that she does not blame the administration for the behaviors of a group of her classmates. However, she believes there’s a frustrating level of discord of a majority-white student body and a lack of education about these issues that needs to be addressed.

«It was surreal to see trust-fund babies with prison tattoos,» she said about a few dozen junior class student offenders who participated in «thug day.»

“[They] consciously looked up a Mastering Cornrows 101 video, or walked into a black hair salon, full of people with different experiences from yours, sat down, and thought you belonged there — that those braids were yours because you paid for them.”

A point of further frustration for Ofori, she said, was that she recently penned a cover story for the school newspaper explaining the mechanisms of cultural appropriation.

«The fact that this happened regardless, and that the article was ignored, hurt a lot because we put so much effort into it,» she said. «Several people were so quick to say that [cultural appropriation] didn’t exist and white people are also called thugs. Those that say that don’t understand the history of that word and that it’s coded language.»

Senior Kelsy Meza, 18, was also bothered by the costumes. After witnessing a group of nonblack students donning traditional markers of black dress and culture, like du-rags and cornrows, she thought to herself, «How did they connect a jersey to this? Why did they have to go so far as to get cornrows done for this day?»

When she and others confronted some white students online, it only created further divides and alliances.

«I felt like I couldn’t go back to class. I didn’t feel safe,» she told BuzzFeed News. «After I said my opinion, they were kind of laughing at me. I felt like they were going to laugh at me in class.»

Several others told BuzzFeed News the teens depicted in the photos are also upset by the online attention, and some have also felt uneasy about returning to school last week.

«The students in the photos are very angry…everyone’s talking about it,» said Ava Lahijani, 17. «But it hasn’t changed anything.»

BuzzFeed News attempted to reach some of these students. BuzzFeed News has also made attempts to reach the school and school district officials for comment.

One person who wished to remain anonymous told BuzzFeed News she knows «some of the students who dressed up» personally who told her that they «were also receiving threatening emails and some of them chose to not come to school in the days following the incident.»

Online, people are threatening and joking in response to Goodwin’s viral tweet about doxing the student offenders.

«If they want thuggery they can send their address and get a first person experience,» one user joked.

Officials of Memorial High School and its school district provided a statement about the matter to the Houston Chronicle last week, maintaining that they’ve taken action against the student offenders.

«While the majority of rising juniors followed the approved dress theme on Tuesday, any instance of an inappropriate or offensive dress violation will not be tolerated. Students found to be in violation of the Student Code of Conduct and dress code will be given a consequence,» a rep for Spring Branch Independent School District said.

However, as tensions escalate over social media and then IRL, students told BuzzFeed News they want the administration to be more proactive about creating a culturally sensitive learning environment.

«I think there is a lot of confusion. I hope they take this seriously,» Lahijani said. «They will not culturally educate them on what they’re doing wrong. It’s disheartening.»

Meza hopes the school can help bridge the ideological and racial divides among the student body.

«Since the [viral tweet], it’s definitely gotten worse… I felt like I couldn’t go back to the class. I didn’t feel safe,» she added.

“[The school] should really do an activity — some bonding activity — where [students] can realize that what they’re doing is wrong. And not have other kids reinforcing it. I want the school to do something.”

A quote about the school environment becoming «worse» came from Kelsy Meza. A previous version mis-attributed it to another student.