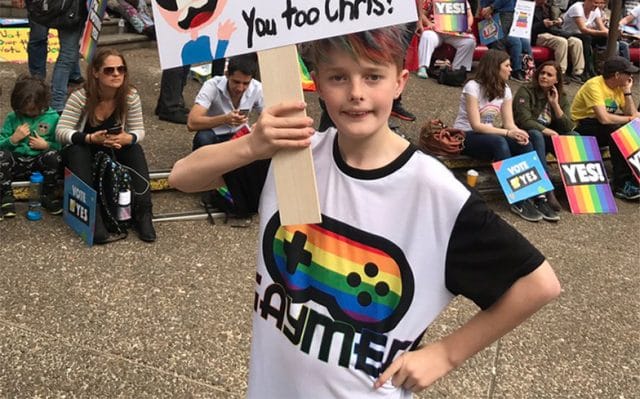 If you’re looking for the most adorable argument in favour of marriage equality, this is probably it.

As Australians prepare to take part in a postal vote on the issue of same-sex marriage, anti-gay propaganda has been circulated around the country and “scaremongering” adverts have aired on TV.

Priests have reportedly called for ‘all gay people to be shot‘, while an Australian MP has recently told LGBT+ people to “grow a spine” and “stop being delicate little flowers” in the face of such bigoted views.

But for every cloud (and there’s a lot of them around at the moment…) there’s a ray of sunshine, and this 13-year-old boy is definitely one of them.

“All I want is the right to marry Chris Hemsworth,” he wrote on a placard held at a marriage equality rally. “You’ve got five years until I’m 18 Australia! You too Chris!”

All he wants to do is marry @chrishemsworth #VoteYes #marriageequality pic.twitter.com/Iv5e1XQLw8

Australia is expected to take part in the postal vote later this month, and while the result won’t be binding, it will give politicians a better idea of what the public wants when they perform a vote in parliament.

A recent poll suggested that 63% of Australians intend to vote in favour of same-sex marriage, but LGBT+ activists have criticised the $122 million procedure, as it will likely give homophobes a platform to voice hate – which it already has.