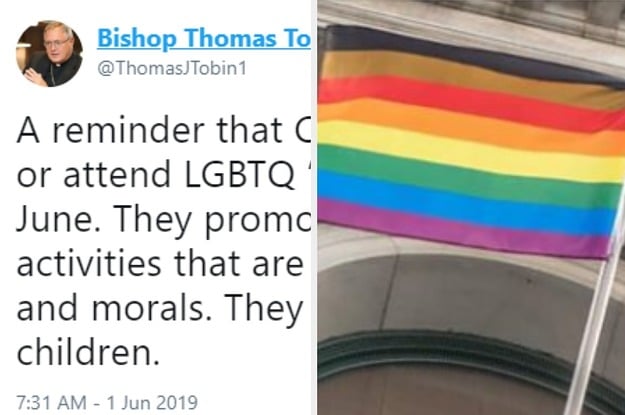 The LGBT community in Rhode Island is fiercely firing back after the bishop for Providence tweeted that Catholics shouldn’t support Pride events.

«A reminder that Catholics should not support or attend LGBTQ „Pride Month“ events held in June,» Bishop Thomas Tobin tweeted on Saturday. «They promote a culture and encourage activities that are contrary to Catholic faith and morals. They are especially harmful to children.» 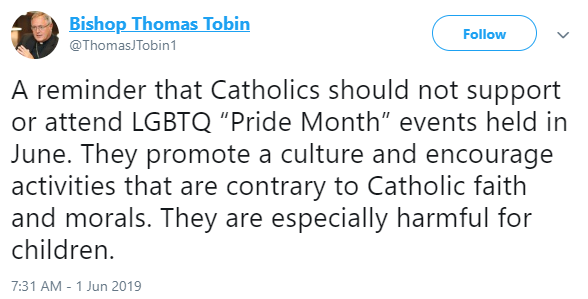 The tweet struck a deep nerve with the state’s Pride organization, which in response planned a rally for Sunday night.

On Twitter, the tweet was promptly ratioed straight to hell, with thousands of replies from queer and trans people and their allies, including some celebrities.

@ThomasJTobin1 This is pure ignorance & bigotry. Ignore this hate-filled hypocrite. His mind set leads only to suffering. He brings to mind those priests who molested my brothers. Of COURSE we should embrace our LGBTQ brothers and sisters and children. Jesus spoke of love ❤️

@ThomasJTobin1 Shame on you. LGBT kids are thrown out on the streets and abandoned because of poisonous thinking like yours.

@ThomasJTobin1 May God strike you down Bishop, at His earliest convenience.

The mayor of Providence — a city with a reputation for being LGBT-friendly — also tweeted in response, saying all are welcome to celebrate Pride month.

«We stand with and support our LGBTQIA+ community here this June and every day in our capital city,» Mayor Jorge Elorza said.

A reminder that Providence is a place where all people are welcome to celebrate Pride this month. We stand with and support our LGBTQIA+ community here this June and every day in our capital city. https://t.co/azexMprNMO

Many also called the bishop a hypocrite for saying Pride month is «harmful to children.»

Back when Tobin was auxiliary bishop of Pittsburgh, his dioceses was named in a grand jury report on the cover-up of sexual abuse by the Catholic church. Last year, Tobin told the Providence Journal said that he was aware of reports of sexual abuse during his time in Pittsburgh, but he added they were outside his responsibility.

«The Diocese of Pittsburgh has been very responsible and transparent in responding to allegations of sexual abuse,» Tobin told the newspaper, adding he was not personally part of the grand jury report.

«He said LGBTQIA+ people are harmful to children and frankly, hearing that from a leader [of] the Catholic church is frankly flabbergasting,» Lazzerini told BuzzFeed News.

«Regardless or how he personally feels, regardless of what the supposed teachings of the Catholic Church are, I don’t think the bishop represents Rhode Island Catholics,» Lazzerini said.

«The bishop said that Catholics shouldn’t go to Pride, shouldn’t support the LGBTQIA+ community, so we’re taking Pride to them,» said Lazzerini, who also serves as the LGBT liaison to the mayor.

«We want every young kid who read what Bishop Tobin put on Twitter, I want them to know that they are loved, they are appreciated, and whichever god they believe in, god loves them.»