Home Gay Life This church believes the LGBTI ‘mafia’ is attempting a ‘hit job’ on... 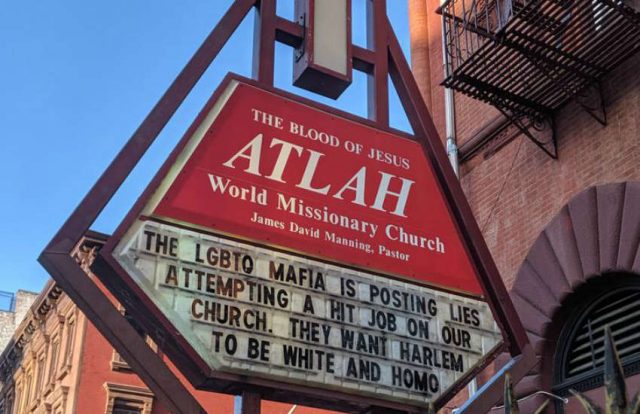 I recently moved to Harlem. While I was wandering around my new neighborhood, admiring the beauty of the old brownstones and Marcus Garvey Park, I came across the Atlah World Missionary Church. What I read of their sign made my stomach churn.

‘The LGBTQ mafia is posting lies, attempting a hit job on our church,’ the sign read. ‘They want Harlem to be white and homo.’

Being born and raised in a place as liberal as New York City, I was taken aback by this sign. So many churches in various areas of Manhattan boast their acceptance of LGBTI congregants. It didn’t occur to me that Manhattan, of all places, could house incredibly homophobic churches as well. Call it ‘East Coast elitism’ if you must, but I always thought this type of overt hatred was reserved for certain areas of the South.

I just had to Google this church when I got home from my walk. Who is the LGBTI mafia? What is the ‘hit job’? I had so many questions.

It turns out, Atlah World Missionary Church and its pastor, James Manning, are notoriously bigoted. In fact, they are on the Southern Poverty Law Center’s list of anti-LGBTI hate groups.

In the past, Manning has made hateful comments directed at former President Barack Obama, who Manning calls ‘long-legged mack daddy’ and says was ‘born trash’. Manning is also famous for his Daily Show interviews with correspondent Jessica Williams, where he said Obama was the next Hitler and that Starbucks flavors its lattes with semen.

In the clip below, he tells Williams that ‘sodomites’ are ‘invading’ Harlem looking for ‘black meat’ (aka black men to have sex with):

Apparently, back in 2016, the Church was facing foreclosure. It happens to be located near the Ali Forney Center for homeless LGBTI youth. The Center wanted to buy the Church’s property to shelter young LGBTI individuals who would otherwise be sleeping on the street. Considering the Church is still in existence, hateful signs and all, I would assume this plan fell through.

However, Pastor Manning’s comments and ridiculous signs aren’t the only awful thing about him.

According to a recent investigation by Huffington Post, the school Pastor Manning runs out of his church has been accused of abusing students. HuffPo spoke to 27 people connected with the church, including students, faculty, congregants, and more.

One former student, Sharif Hassan, reported being locked in the Church’s basement for days with limited access to food. Another student claims Pastor Manning outed him to his parents, causing him to be kicked out of his home. And a female student says Manning harassed and sexually assaulted her when she was 18.

‘It was constant hate and control and manipulation,’ Hassan, who is now 25, told the Huffington Post about his experience. ‘I felt like we were his slaves.’

Indeed, the school’s curriculum includes a lot of hate-filled speeches about ‘evil f*ggots’. The school’s website even tells parents to ‘Stop the homosexual brain washing of your children’ and to ‘give them a chance at a normal demon-free sexual life’.

According to the HuffPo investigation, Manning forced students to watch YouTube videos he made. While his YouTube show, The Manning Report, was banned by the site for violating community standards, he still makes videos to post on the Church’s site. Most recently, he made one claiming that actor Jussie Smollett and Barack Obama were lovers.

Huffington Post’s investigation goes on and on. It outlines more gruesome details of the Church’s history, including Pastor Manning’s own god complex.

WNYC reports that this HuffPo piece is the ‘hit job’ put on him by the ‘LGBT mafia,’ which the sign I came across references.

If reporting facts is a ‘hit job’ and believing that love is love makes one part of a ‘mafia,’ then I guess this bisexual journalist and now Harlem resident will definitely be on Pastor Manning’s shitlist. All in a weekend’s work!

Mormon Church says it opposes the Equality Act in Congress

Homophobic US pastor banned from Ireland