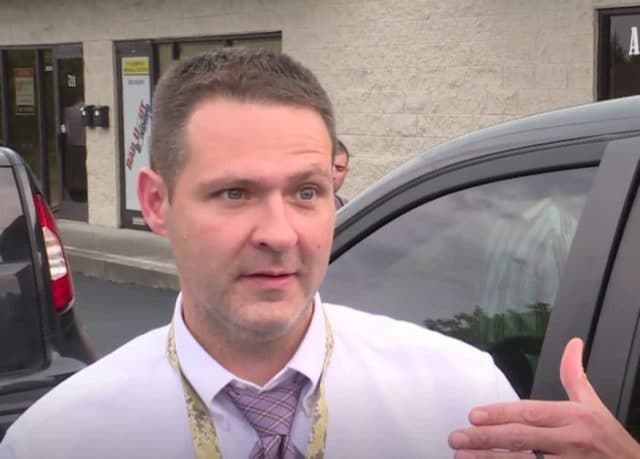 A police officer who called for death for gay people has asked for early retirement.

Grayson Fritts is a deputy with the Knox County Sheriff’s Office in Tennessee, as well as the pastor of the All Scripture Baptist Church.

A local television reporter was invited to sit on a sermon last night at the church, when Fritts called other Baptist preachers “weak and spineless” when it comes to homosexuality.

His sermon, which was entitled “Sodomite Reprobates,” said that God hates. “Just as much as God loves, God hates,” he said.

He then turned to advocating violence.

“I just want to encourage you guys to not back down,” Fritts told the congregation. “It doesn’t matter what comes your way. Don’t back down.”

He said that he’s not “raising a militia.”

“Here’s how it should work, it shouldn’t work when we go out and we enforce the laws, because the Bible says the powers that be are ordained of God and God has instilled the power of civil government to send the police in 2019 out to these LGBT freaks and arrest them,” he continued.

“Have a trial for them, and if they are convicted then they are to be put to death. Do you understand that? It’s a capital crime to be carried out by our government.”

“After this onslaught, where the government’s arresting them and carrying out God’s laws and they’re all dead.”

Posted by All Scripture Baptist on Wednesday, June 12, 2019

The Knox County Sheriff’s Office said that Fritts applied for early retirement days before the sermon.

“Detective Fritts is no longer on active duty with the Knox County Sheriff’s Office, he is currently on paid sick leave until the effective date of the workforce reduction which will be July 19, 2019,” said Sheriff Tom Spangler.

Knox County District Attorney General Charme Allen said that she would be reviewing all cases where Fritts was a witness.

“I find this speech personally offensive and reprehensible,” she said in a statement. “When any potential witness in a criminal proceeding expresses an opinion of hatred and/or bias towards a class of citizens, I am ethically bound to explore that witness’ credibility.”

Fritts, though, told WVLT that his homophobia never affected his work, saying that if he worked at Burger King he would serve LGBTQ people hamburgers because “that is what my job would be.”

So LGBTQ people should be put to death, but it’s not like Burger King should deny them hamburgers.

Just before Wednesday night’s sermon, a rainbow flag and a note were left at the church.

I don’t know what happened to you, but I am so sorry.