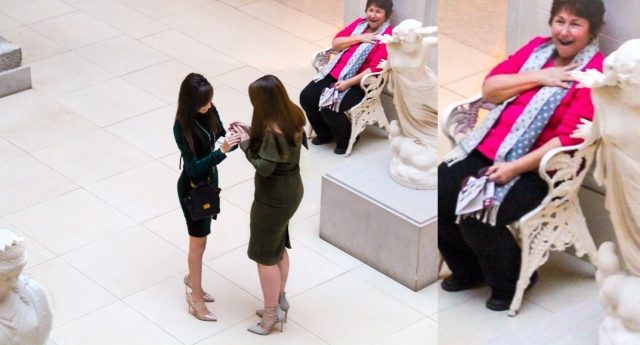 A total stranger has given a lot of joy to a newly-engaged couple, after being accidentally captured in one of their engagement photos.

Jessica Rodriguez picked a quiet moment to propose to long-time partner Chelsea Miller in the foyer at the Art Institute of Chicago.

She sprung the surprise on her partner with help from a few friends, who appeared with a giant banner bearing the words ‘Will You Marry Me?’.

The couple captured the attention of nearby crowds as Jessica got down on one knee – and an emotional Chelsea accepted the proposal to applause. One of their engagement photos captured the moment better than anyone could have expected – thanks to a perfect stranger who was captured sitting in the background, clearly overwhelmed with joy.

Jessica’s brother Carlos shared the moment on Twitter, writing: “My sister proposed to her GF today and look at that older woman’s reaction.”

Speaking to news.com.au, Ms Rodriguez: “I don’t think we realised she was there. We were so nervous.

“We were going over the photos my friend Ed Sanchez took [and] we discovered that gem with her sweet reaction.

“It really made that photo even more special.”

The couple have been together since 2012.

Explaining the venue for the proposal, Ms Rodriguez said: “If someone could describe our love it could only be done through a work of art. It is happy, fun, chaotic, inspiring and strong.

“I want to keep discovering art for the rest of my life by your side.”

Watch a clip of the proposal below: