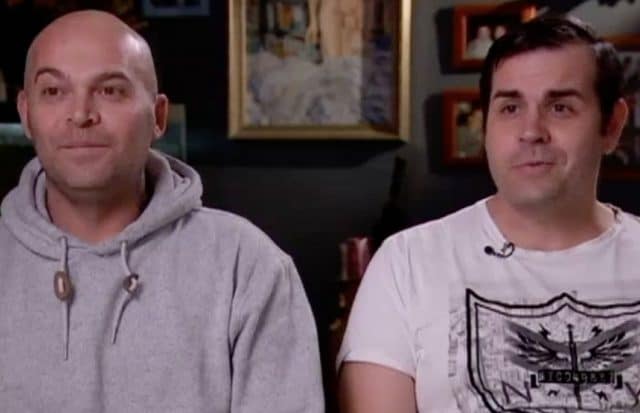 A gay couple in Australia has come under fire for their opposition to marriage equality.

Ben Rogers and Mark Poidevin appeared on the nightly news and current affairs show 7.30 to share their surprising point of view.

Australia is gearing up to hold a non-binding postal survey on marriage equality. Australians will be asked via a postal ballot if they support same-sex marriage. If the majority vote ‘yes’, parliament will vote on the issue.

The men have been together for 15 years after meeting on dating site, Gay.com. Poidevin even proposed to his boyfriend five years ago.

‘We’ve been through our ups and downs like anyone else, but I love him dearly and there’s no-one else I’d like to spend my life with than him,’ Poideving told 7.30.

They explained they believed in preserving traditional marriage between a man and a woman. Religion – especially for Poidevin, who’s a devout Catholic – was one of the main reasons they oppose same-sex marriage.

‘If we make one exception for one community, that being the same-sex couples, where does it stop?’ he said.

‘Do we then see other cultures being allowed to have multiple marriages? Do we see the age of consent being lowered for another group of minorities? That is my concern, of where it would lead.’

But they’re not homophobes

The men said they have been criticized for their opinions.

‘The campaign’s gotten nasty on both sides and I think the comments that I hear are, ‘You’re a homophobe if you don’t support gay marriage’,’ Poidevin said.

‘You’re not intolerant if you don’t support a view.’

Internalised homophobia is corrosive — it attacks our sense of self worth. But, that’s no excuse to project this trauma onto fellow queers.

Poidevin said the postal survey may go in the same direction as the UK’s Brexit vote and the US’ election of Donald Trump last year. He believes many people aren’t being honest in opinion polls because they’re afraid of being called homophobic if they admit they’re voting no.

‘This could be the Brexit or Trump moment for Australia, where the polls are saying one thing but you go to the ballot box and people are clearly in another mind, going to vote another way,’ he said.