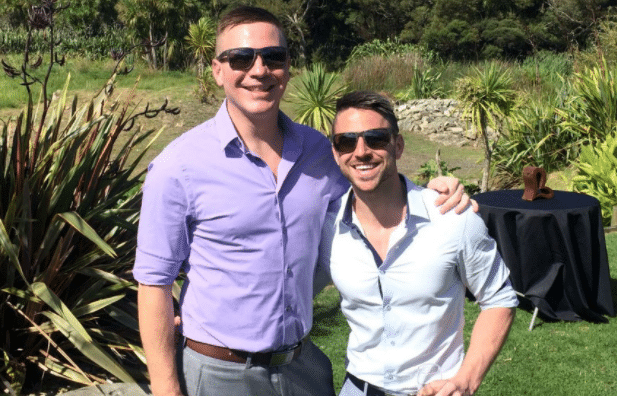 Stephen Heasley and Andrew Borg were looking forward to their September wedding in Pennsylvania. Then they received a rude awakening in the form of homophobic pamphlets.

The pair, who currently live in Australia, ordered the pamphlets from Massachusetts company Vistaprint.

The cards were supposed to have the order of events, members of the wedding party, and lyrics to the Above & Beyond song Treasure.

Instead, they featured fire-and-brimstone religious imagery and words. One of them read: ‘Satan knows our flesh is weak. He preys upon our weaknesses to tempt us to sin. Satan can only influence us to want to sin. He cannot make us sin.’

As they received them on the eve of their big day, Heasley, 31, and Borg, 39, quickly had replacements made. They then went forward with their joyous celebration.

However, the hurt and anger have not dissapated and now they’re suing Vistaprint.

The couple filed their claim on Tuesday (16 January) in U.S. District Court of Massachusetts for breach of contract and emotional pain.

‘At first we thought it was simply a mistake, and we had accidentally received someone else’s order,’ the pair wrote in an email to Yahoo! Lifestyle. ‘But once we saw the images and actually read a bit of the pamphlet, we quickly realized this wasn’t a simple or innocent error.’

They continued: ‘Both of our initial reactions were ones of shock … utter shock. The wording and imagery was aggressive, threatening, and deeply personally offensive. This was by far the most direct, personal, and aggressive act of homophobia either of us has experienced to date.’

When they decided to go the lawsuit route, they hired legal representation in Boston and New York City.

‘Vistaprint would never discriminate against customers for their sexual orientation. We pride ourselves on being a company that celebrates diversity and enables customers all over the world to customize products for their special events. We have just been made aware of this incident in the last few hours. We understand how upsetting it would be for anyone to receive materials such as these the night before their wedding and we have immediately launched an internal investigation. Until we have had the opportunity to complete our investigation, we cannot comment further.’

Heasley and Borg say ‘the pain from those memories has not faded’ after four months of marriage. They want to hold the company accountable and prevent this from happening again.