Home Gay Life This Gay Man Threw Glitter At A Homophobe Who Called Him A... 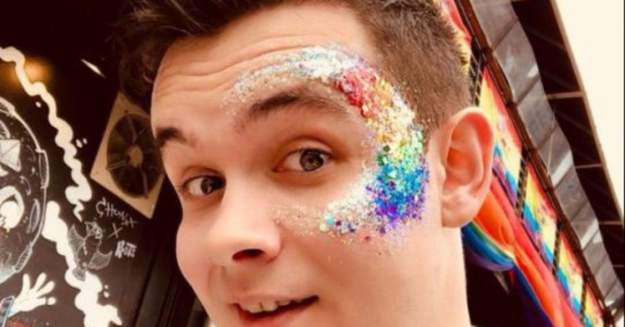 A gay man from Brighton gave two homophobes a hell of a surprise.

To prepare for Brighton Pride, 27-year-old Nick Hurley just happened to have a bag of glitter on his person. This became an unfortunate coincidence for two homophobes who passed him.

As Hurley was walking around, a car stopped beside him. One of the two men inside decided to yelled out the anti-gay slur “f*****.”

Hurley, the quick thinker, then thought up a creative way to combat the hate.

“In a moment of creative frenzy I realized I had a bag full of glitter. I opened one tube and reached inside the window,” he told Metro.

“I thought ‘this might be a bad thing to do’ and launched the tube of glitter in the passenger window,” he added.

“The traffic lights changed and the guys in the car looked flummoxed, as if to say ‘did that really happen?’”

If you think it’s okay to shout “faggot” at me out of your car window while you drive past, then I think it’s okay for me to empty a tube of glitter through that window when you stop at the traffic lights.

Your casual homophobia has supergay consequences. ??

Hurley also made sure to use the attention he was getting online to share that the glitter was biodegradable and to promote donations to the Stonewall Charity.

It appears that some of you are concerned over the environmental impact of my glitter activism, I want to mention a few points:

So this went a bit crazy. I don’t have anything to promote or sell, so while you’re here, why not drop a donation to @stonewalluk?

Through all the humor and laughs, Hurley shares that he’s had it way worse, and is thankfully he found a quick and creative solution for this much lesser attack.

“I have had death threats, a glass bottle thrown at me, a brick thrown at my house, all of these things have happened in Manchester.”

“I have been thrown off my bike while cycling to work. This isn’t the most horrific crime that has happened to me, but I wanted to raise awareness – in a funny way.”

Sports Writer Comes Out As Gay On Radio Show