Home Gay Life This grandad scolded his daughter after she kicked her son out for... 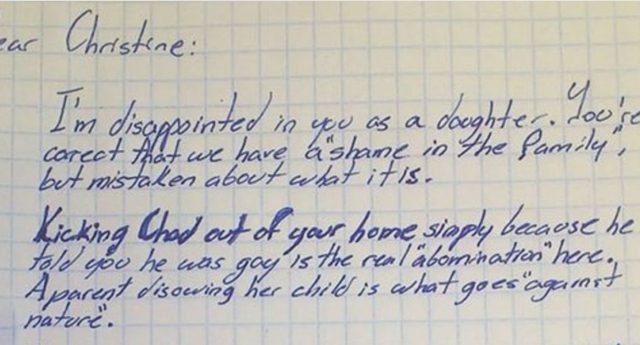 This grandad wrote a moving letter after his daughter kicked her son out for being gay.

The obviously proud ‘pa was disappointed in his child’s actions, and vowed to look after her son if she couldn’t. He called her out for being the “shame in the family”, and choosing to be hurtful and narrow-minded. He then goes on to mimic her actions and disown her for disowning her own son.

The original letter appeared on the FCKH8 Facebook page after Chad sent the letter in to the team. However, the duo have opted to remain anonymous for the time being because Chad is not fully out yet and are intimidated with the amount of media requests.

In the comments of the post, users shared motivational comments with the duo. “It’s kinda sweet how he called her ‘the b word’ instead if a bitch. He respects gays and women,” wrote one user.

“I’m thankful he is there for his grandson, but my heart goes out to their entire family, love should never split a family apart,” another wrote.

We’re sure the grandad and grandson duo will carry on living fabulous life!

I’m disappointed in you as a daughter. You’re correct that we have a “shame in the family”, but mistaken about what it is.

Kicking Chad out of your home simply because he told you he was gay is the real “abomination” here. A parent disowning her child is what goes “against nature”.

The only intelligent thing I heard you saying in all this was that “you didn’t raise your son to be gay”. Of course you didn’t. He was born this way and didn’t choose it any more than he being left-handed. You however have made a choice of being hurtful, narrow-minded, and backward. So, while we are in the business of disowning our children, I think I’ll take this moment to say goodbye to you. I now have a fabulous (as the gay put it) grandson to raise, and I don’t have time for a heartless B-word of a daughter.

If you find your heart, give us a call.