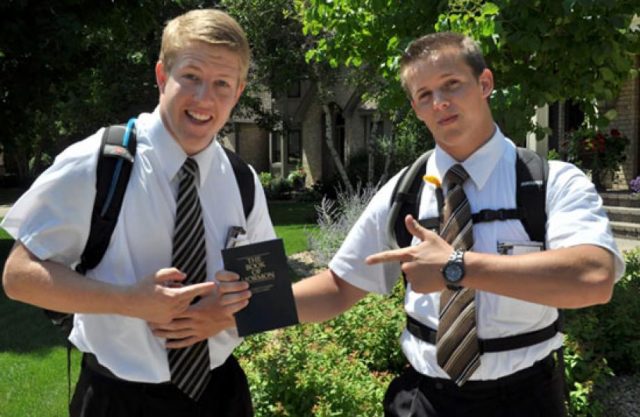 There’s some tough choices ahead for “Graham,” who wrote in to Gay Times to ask for help with his boyfriend.

Here’s the situation: Graham grew up as a Jehovah’s Witness, but is no longer suffering under religious baggage. His boyfriend, on the other hand, is a Mormon and wants to stay with the church. That’s a problem, since we all know what the LDS establishment has to say about gays (nothing good). And the boyfriend is naturally too scared to socialize anywhere they might be discovered, so they have to sneak around.

Should they stay together, or should Graham ditch him?

This is a tough one, since the two boys also say they have a strong connection. But, ugh, the weight of a homophobic religion is often enough to drive a person too crazy to maintain a relationship.

Their best chance for success is probably for Graham to express his needs — remember, self-care isn’t selfish — and give the Mormon boyfriend a choice: “either let me help you leave this homophobic church, or stick with the church that hates you without me.”

(Of course, this advice doesn’t stand if they’re still in high school and living at home. If you’re stuck at home with homophobic parents because you’re underage and can’t leave, it’s often best to play it safe and fly under the radar until you can GTF out of there.)

The good news is that if he really wants to remain Mormon, there are gay Mormon groups out there that can help, like Affirmations. He doesn’t have to leave the religion altogether. But any adult who sticks with the mainstream established LDS organization is going to have a life of emotional manipulation and abuse ahead of them, and those folks need to get their own issues sorted before they’re ready for a relationship.

Sneaking around is the worst thing you can do for yourself and the people you love. As the saying goes — if you sneak, it means you think you’re doing something wrong. Does this boyfriend think that his relationship is morally wrong? If so, Graham, you don’t want to be a part of it. As long as it’s safe for him to leave the church, let him know that you’ll support him and will help him get away from the homophobes; but if he refuses to go, let him know that it was fun but you need a boyfriend who can be open.