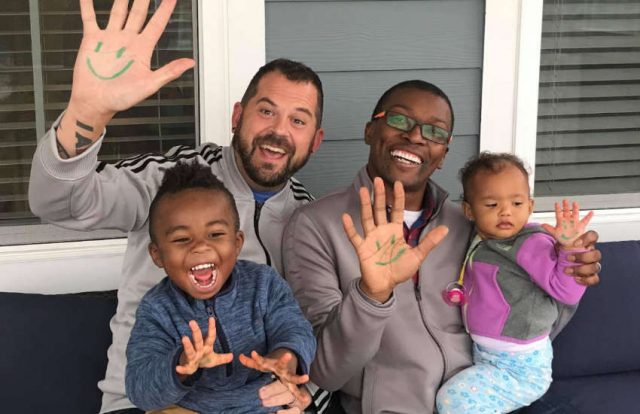 Being a gay dad means that you will come out. A lot. Over and over again.

Before I was a parent, my being gay either didn’t come up or was a given. It was certainly not a topic of conversation with waiters, cashiers or fellow shoppers at the store.

But then I became a dad. 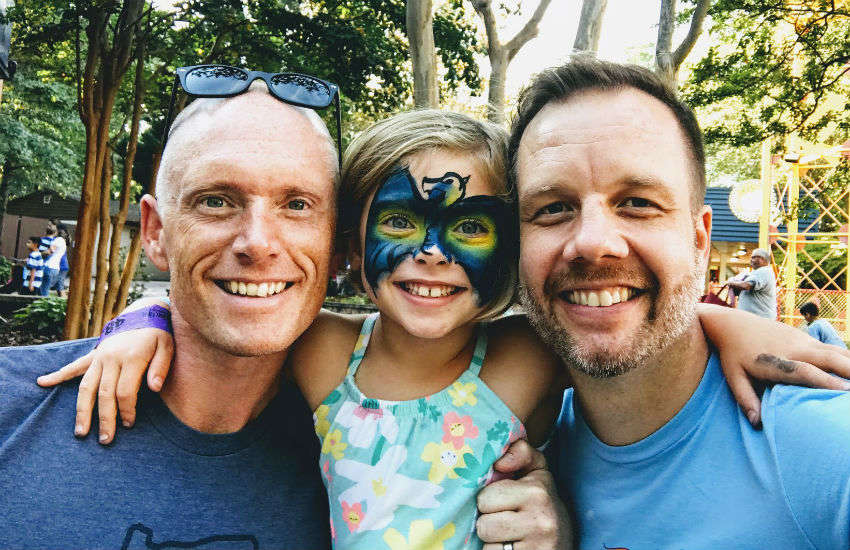 Before having a child, I assumed most people knew I was gay. Maybe it was the way I talked, the way I moved, or maybe the things I said. I didn’t know for sure if they knew. I just assumed so, but it didn’t really matter anyway.

And then shopping with a child changed things. If my husband wasn’t with us, most people assumed I was straight.

I won’t lie, it was kind of fun at times. But it was also a bit of a nuisance to constantly clarify to others what our family looked like. On the other hand, if we were all together as a family, we were automatically outed.

When one guy holds the baby, and the other carries the diaper bag, it’s obvious to most that they are a family.

But then, again, there’s always the exception.

On one Saturday afternoon, we strolled our two-year-old around, and passed an outdoor beer festival. It was hot, we were thirsty, and decided to get in line for some local beer tasting.

We started a conversation with two friendly ladies behind us. One of them pointed at all of us and asked: ‘How did you pull this off?’

We had gotten used to this question, so we quickly responded: ‘Through adoption! She is adopted.’ But the answer didn’t seem to suffice.

The lady clarified: ‘No, I mean today, how did you pull this off?’

We told her that we lived in the neighborhood, and came by foot. Still, our answer didn’t seem enough.

She appeared a bit frustrated with herself for not asking her question more clearly: ‘I mean, how did you convince mom to let you bring the baby with you and a friend to a beer festival?’

After we explained that we were a family, the two ladies felt so embarrassed about their assumption. For the rest of the day, they kept remarking how lucky our daughter was to have two dads, clearly in an effort to express their support.

Families look all kinds of ways.

What used to be the traditional family structure is evolving. However, many people’s assumptions aren’t as quick to follow.

I asked a group of gay dads about their experiences and here’s what they said:

I took my four-year-old to lunch at a popular place near our house. Two older ladies came up to our table to say how cute my son was and asked: ‘So where is the mommy?’

I just responded: ‘No mommy.’ hoping that would be the end it, but it wasn’t.

One continued: ‘Well, of course there is a mommy!’ And I said: ‘Nope, two Dads!’

Their faces grew a look of disgust so I calmly asked, with as with as much certainty as they to me: ‘So how long have you ladies been together? It appears a long time.’

The look of anger and embarrassment they had on their face was a perfect opportunity to discuss boundaries with my child. Including how to be polite and respectful of other people’s time and space.

While I was in line at Target, a lady said: ‘Oh, it’s mommy’s day off today!’

I stated: ‘No, it’s just us dads. We just adopted him,’ to which she replied: ‘Oh, we considered adoption because we were dealing with some infertility issues… but you wouldn’t understand that.’

I responded: ‘Because it’s so easy for us to have kids? We’ve been trying the natural way for years, but it just didn’t seem to take!’ 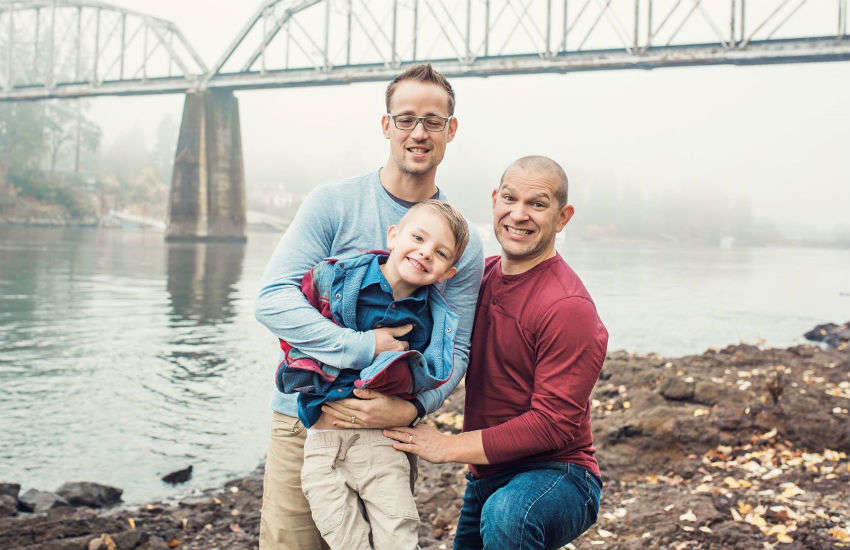 After the cashier gave her a tissue to clear the Starbucks from her nasal passages that she had snorted up there at this comment, she apologized, saying: ‘Wow, I never thought about that!’

After she left, the cashier (whom I assume was gay) grabbed my hand and said: ‘Sweet Christ, that was awesome!’

Age gaps create an even more confusing barrier for us. My husband is 17 years my senior. Our daughter is biologically mine and her mom is deceased.

Anyway, one day, a cashier commented on how cute our daughter was. She pointed at my husband, then me, then our daughter while saying: ‘Grandpa, Daddy, Daughter’.

We corrected her about four times by saying: ‘No, Daddy, Daddy, Daughter,’ I then had to explain that he was my husband, and she was my daughter.

The cashier still didn’t understand, so I explained that we were gay, and she was our daughter. Her response was: ‘But you don’t look or sound gay!’

We don’t mind at all talking about our family origins. But gosh, do we need to explain every last detail in public, for example while we stand in the middle of a cramped tailor shop? 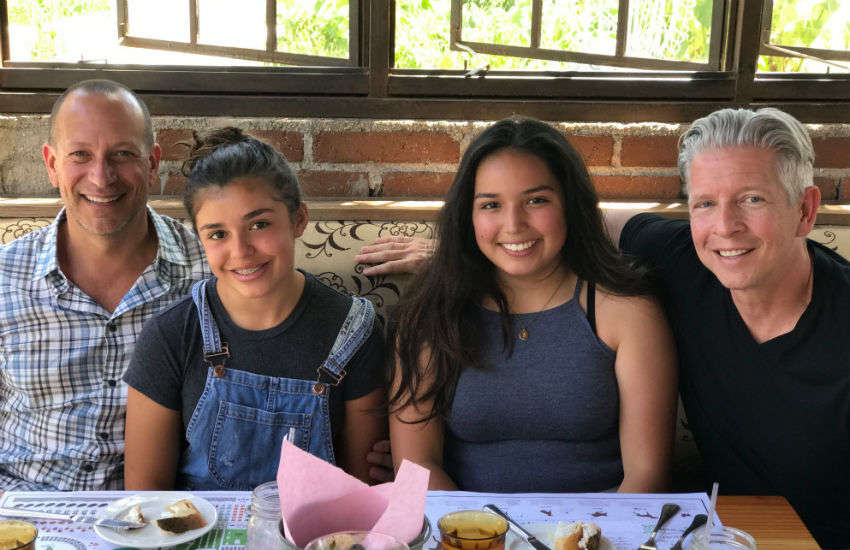 I remember taking the girls to the tailor to have their fittings for the flower girl dresses for a wedding. Out of the blue and friendly enough, the tailor blurts out: ‘And where is mom today?’ as he pinned up Ava’s dress.

As I mentally ran through my list of potential answers, my other daughter, Sophia, took care of the situation – and probably way better than I ever could.

‘We don’t have a mom. We have Daddy and a Papi,’ she stated with a clear and unconcerned expression.

Right then and there it was clear to me. My kids are better adjusted about it than I am! So what was I worried about in the first place?

One time, a lady asked my kids about their mom. My kids told her that they had two dads. She looked confused, so I explained it to her.

She seemed to understand, but then kept referring to me as their mother.

On a Saturday morning, my husband Carlos wanted to get a haircut as he always does at a local barbershop. We decided to take both our children with us as it was during the local farmers market.

As we finished up and were leaving, each of us with a child in hand, a woman walked over to us and with an emotionless expression said: ‘Oh, that’s nice of you guys to give your wives a day off today.’ 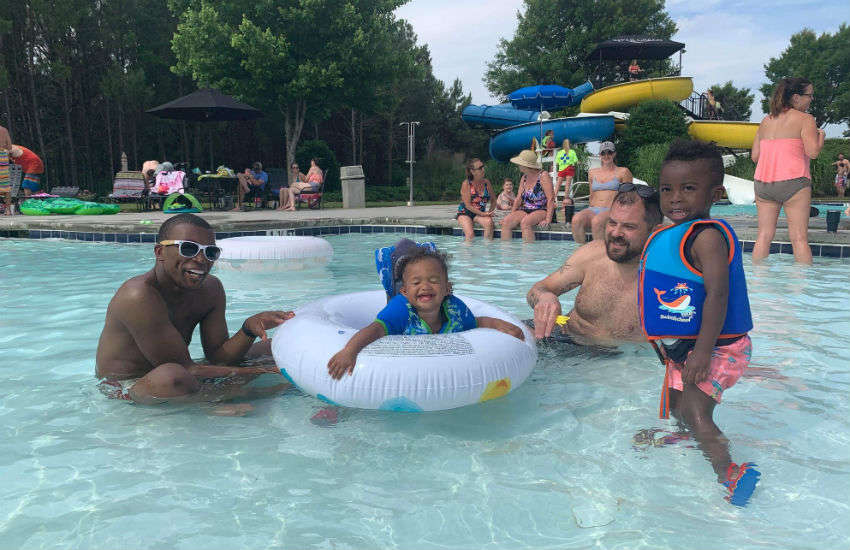 Keep in mind that our son is African-American, our daughter is bi-racial with a very light skin complexion at the time.

My husband and I looked at each other and replied: ‘Yes, these are our children, but they are ours together. We are a couple and we don’t have wives and our children have two dads.’

In a shocked and somewhat perplexed look, she shook her head and replied walking away: ‘Oh OK.’ and the encounter was quickly over.

While this situation could have ended differently we have come to conclude that it is our duty to inform and educate whenever similar situations arise.

My twins and I travel a lot. I have been asked once or twice about ‘their mother’ but it never goes beyond my answer that I’m the mother or there is no mother. 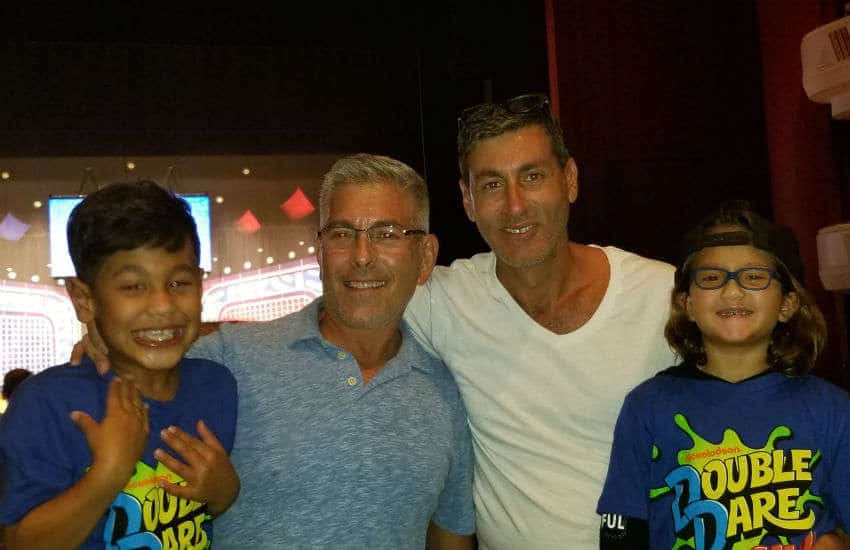 One time in Puerto Rico, it was assumed that I lost my wife and was a widow with three-year-old twins. Someone must have started that rumor at the hotel.

Suddenly we were getting the royal treatment from everyone! At the end of the trip, I received a sympathy card signed by the hotel staff. I was laughing all the way back to the USA!

I am very outgoing. My husband is much is quieter.

If I am chatting up some random passerby and the next day my husband is out, they often assume he is me. 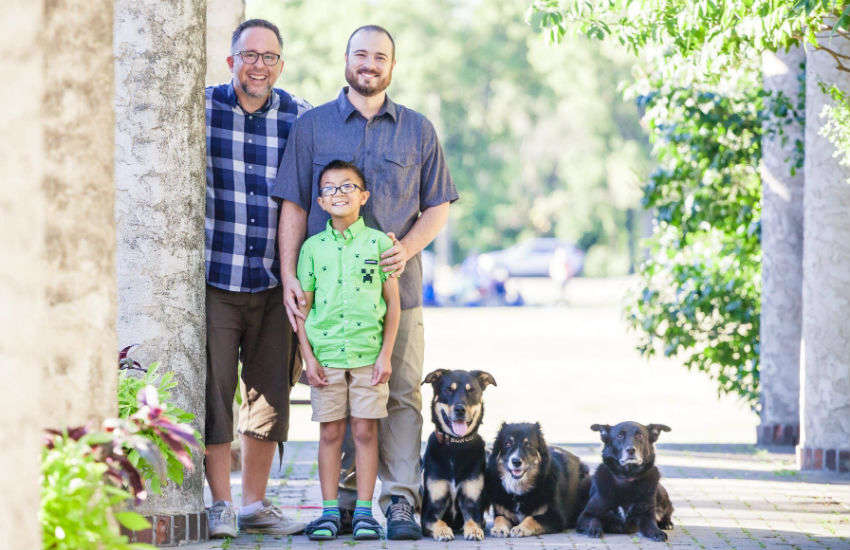 This week, some dad was waving at him, and then crossed the street to chat. At this point we understand that people just think we are one person.

It’s way better than mistaking us for brothers, and then wondering whose kid it is.

When no other parents offered to be room-parent for my daughter’s class, I told the principal I’d do it. She then promptly thanked me for being the ‘room-mom’, and realized what she said shortly after, saying, “You’re the first dad we’ve ever had be a ‘room parent!’” 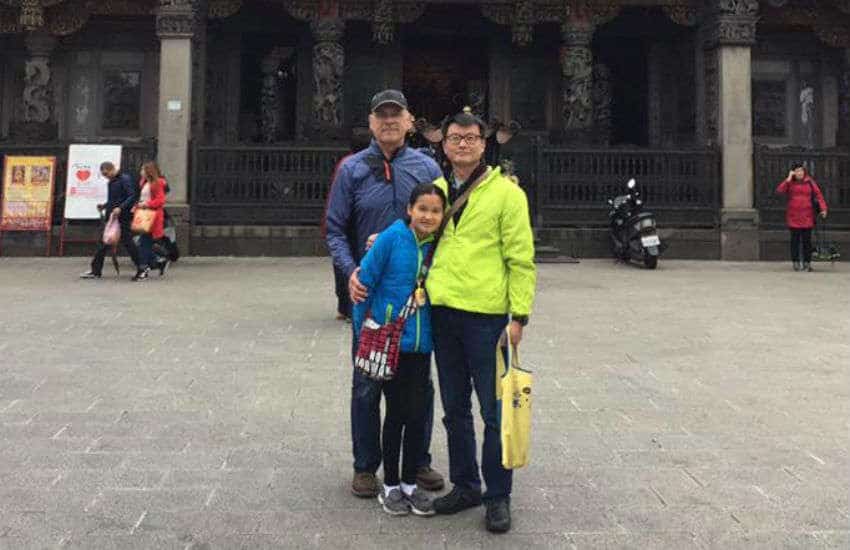 Our then five-year-old was playing on the swings at the park. A young couple with a daughter showed up.

Their daughter ran toward the swings and they became ‘friends’. The couple was seated 30 feet from us, but not engaged with us.

The kids were talking, and, of course, the little girl asked: ‘Where’s YOUR mommy?’ Their attention clearly focused on us.

Our daughter: ‘I don’t have a mommy, I have two daddies.’

She: ‘That’s silly, nobody has TWO daddies!’ They were by now fully at attention.

Our daughter: ‘Well, I DO, I have two daddies’.

The little girl took a breath, and said: ‘Well, that’s NOTHING! MY daddy went to PRISON!’

The mom, embarrassed, shouted out: ‘Sally, we don’t need to talk about that!’ The little girl continued: ‘But he DID. He did something bad at work and went to JAIL!’

With that, our eyes locked with the couple, he shrugged, and we all laughed.

The hubby, I, and our two boys were in a restaurant one evening. 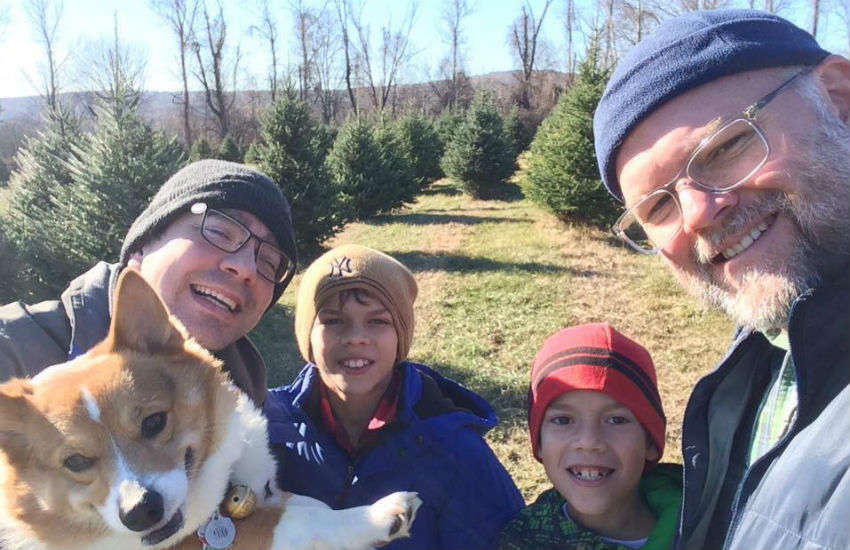 A couple, who had been there a bit before us, paid their bill. As they walked out, the wife stopped and said to both of us adults: ‘I wanted to let you know that your children are so well behaved.’

I consider it one of the greatest compliments I’ve received as it said so much with so few words.

Mark Loewen is a psychotherapist, parent coach, and dad. Originally from Paraguay, he now lives in Richmond, VA with his husband and their daughter. Mark is the author of the children’s book What Does a Princess Really Look Like?  for more information.