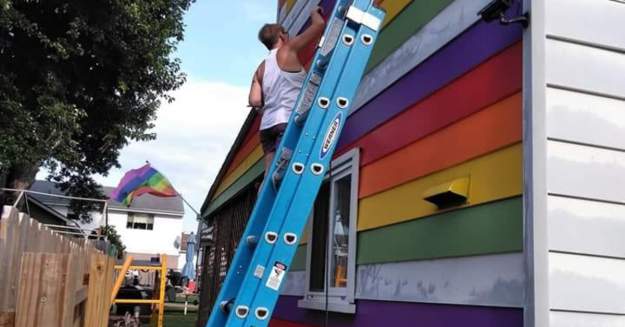 In order to get back at homophobic neighbors, a lesbian couple turned their house into pride colors.

According to WTAE Pittsburgh, a couple named Lisa Licata and Seherry Lau live in Penn Hills, Pennsylvania. When they moved into their home, they immediately knew that their next door neighbors were homophobic.

Unfortunately, that hate turned its head to the couple as their neighbors, Ron Makay and Iolanda Wieczorkowski, started to call them slurs like d**** and homo.

Things escalated into violent measures last month when Makay allegedly shot Licata and Lau’s dog with a BB gun. Police got involved and charged Makay with animal cruelty and discharging an air rifle.

Finally saying enough is enough, Licata and Lau decided to build a fence between their house and the next one. Then just for added measure, they painted the side facing Makay and Wieczorkowski’s house with rainbow colors.

After the neighbors complained, they then decided to paint that whole side of their house Pride colors.

“Our rainbow fence really ticked them off. Initially we were only going to do the fence, but when he complained to our municipality about our rainbow fence, and the hate continued, we decided to go big and do the side of the house that faces them,” Licata told PinkNews.

Not only were the couple helped by friends in order to paint the whole side of the house, but they were greeted with online support after the fact.

“The reaction of the community has been great!” Licata said to Mashable. “Mostly everyone has been so supportive … The neighbors have been quiet because they’ve been told by their attorney to be quiet.”

While the neighbors have been quiet, because their attorney has told them to remain quiet, Lau and Licata say that this isn’t the end. Not only will they be appearing for Makay’s court hearing concerning their dog, but the couple shared they intend to paint their entire house with rainbow colors.

“This is the 21st century,” Lau told WTAE Pittsburgh. “We live here. We’re not moving. My family accepts us. Our friends accept us. If you don’t like it, just live your life, leave us alone and everything’s cool.”