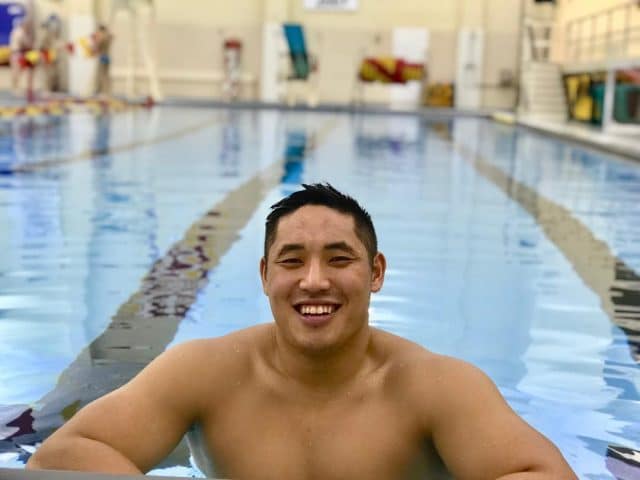 Swimmer John Kim thought that this year’s National Coming Out Day was the right time for him to finally share a secret he’s been hiding for too longer.

Kim is a cadet at the Virginia Military Institute and also the recently elected captain of the school’s Division 1 swimming team.

Kim shared with Outsports that he finally came out to his friends and team, which scared him beyond belief.

“My fear was based on the school being conservative and tradition-laden,” he said but he added, “If I wasn’t honest with my coaches and teammates, how could I expect others to be honest with me?’”

Thank you @outsportsinspire for sharing my story to the world. Amazed by the support from friends, family and the LGBT community . Link to the article is in my bio . . ?️‍? ?️‍? ?️‍??️‍? . . #outsports #swimming #gay #LGBT #inspire

John Kim first told his two best friends, then his co-captain, then his coaches and eventually the team.

He recounted the way he told his coaches, “Coaches, I have been meaning to share this with you since the first day of the season, but after some setbacks, I am finally ready to share … I’m gay.”

Then, he shared his truth with his team and received first murmurs before gaining applause.

John Kim is the latest in an increasing list of athletes, specifically college athletes, who are coming out of the closet. And if you ask Kim, it’s about time.

“By telling my story, I hope that I can help anyone who is struggling to come out,” Kim explains.

“I realized I was gay in high school, and it still took me until I was 22 to feel comfortable telling my story.”

Missing the doggo a lot ???? #sircharlespuppy

….so I guess you are what you eat…big and gay…sorry ladies .? .? .? It wasn’t until today till I told some of my best friends and most importantly my teammates about my sexuality, being gay. Since early on I knew I was gay, and it wasn’t until high school that I was for sure, but I didn’t tell anyone, I thought it would just phase away. Then once college started, being at a Military school, I didn’t know what do if someone knew I was gay. . Flash forward to this summer, I went to my first Pride in DC with my best friend, and realized that there isn’t any reason to shy away from who I really was, and through new friends and support from old friends and family, I got the courage to finally come out. And after today, I feel like a whole lot has been lifted off my chest. . I’m still a student, swimmer, coach, son, brother, dog dad, friend just also gay. .❤️ So be you, be proud, have fun, and don’t do ordinary cause that’s boring! . Happy #NationalComingOutDay #instaguy #instagay #gay #werkit

Actually crying that summer is officially over and I’m back at school. ?????‍??‍? Cheers to an unforgettable summer filled with great experiences, great friends (both new and old), and great opportunities. I can’t wait to see what the future holds. And I guess this semester