Home Gay Life This new video game lets you take on Trump with the power... 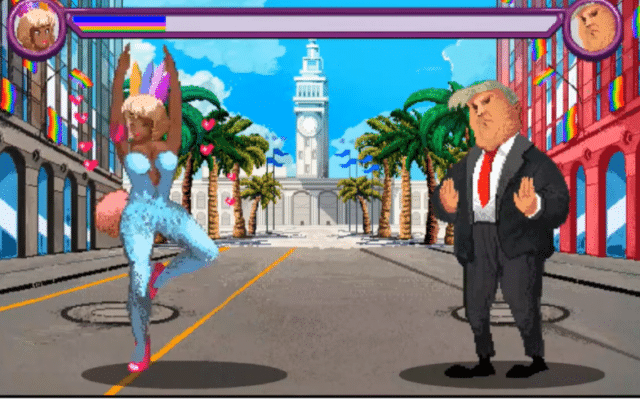 Green Man Gaming’s latest retro rhythm game, Pride Run, recently released its first trailer and it looks incredible. The game sees you keep a Pride parade on track in a rhythm based style, before taking on ‘Enemies of Pride’ in a one-on-one dance-off.

The game will take place across 16 different locations including places like San Francisco and Berlin, as well as places more hostile to the LGBTQ community like Istanbul and Moscow.

The ‘Enemies of Pride’ are styled after groups opposed to the LGBTQ communities, as well as Donald Trump, a shirtless Vladimir Putin riding a bear, and an internet troll sat in his mum’s basement.

Ivan Venturi, the CEO and game director of IV Productions, said: “We’re a diverse development team, and many of us have been lucky enough to attend different Prides around the world.

“We felt it was about time someone took the sheer energy, passion and extravagance that emanates from these celebrations of LGBTQ+ culture beyond attendees and out into the wider world.

“Players who successfully grow their parades will then be tasked with taking on a boss in a one-on-one dance duel, with the victor taking control of the city – and, in the end, the world.”

Jonny Merritt, the head of developer relations at Green Man Gaming, said: “At its heart, Pride Run is a celebration of Pride events around the world. The game focuses on rhythm, taking the beat that defines many a march and making it a foundation of play.

“We think the fun nature of what is definitely a light-hearted, celebratory take on the Pride movement will translate well with gamers across the globe.

“As part of the launch of the game, Green Man Gaming is exploring ways of supporting LGBTQ+ rights charities who we feel are aligned with our inclusivity and diversity values.”

The first video game to win the award was The Elder Scrolls Online: Summerset. The game won for its quest, Manor of Masques, which sees the player reunite a trans woman with her estranged sister. The questline also deals with the hardships of coming out and familial acceptance.