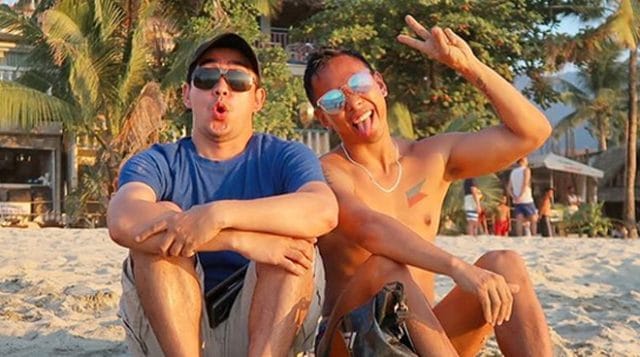 Mikey Bustos is an insanely popular social media influencer with over 880K YouTube subscribers and almost 150 million video views plus over 125K Instagram followers and another 100K on Twitter.

Here's to freedom to do, be, have, or dream of anything you want in life! Power is in your fist, my friends! Pump it! ✊??? #Amanpulo25

In an Instagram post this week, the 37-year-old Filipino-Canadian comedian made a big reveal: He’s a proud member of the LGBTQ community! Not just that, but he’s got a boyfriend, RJ Garcia, who also happens to be his manager.

Meanwhile, RJ shared his own photo of himself and Mikey to his Instagram page, along with the caption: “Exact opposites, but a perfect match!”

Exact opposites, but a perfect match! ❤??

Mikey followed up his initial posts with another photo of himself in a pair of rainbow sunglasses.

“Life is sweet!” he wrote in the caption, adding that it never crossed his mind that would receive so much support sent from “all corners of cyberspace, media, and the world.”

“Figuring out how to navigate life in the most authentic and positive way has been such a long +37 yr journey for me, and at this moment, I feel I’ve reached some kind of karmic jackpot!”

He continued, “It’s 2019 (as my dad put it when I came out to him a few weeks ago), and a great time to be alive LGBT. #FilipinoPRIDE“

Life is sweet! ❤?️‍? Thank you for the outpouring of love, guys. @Appleboyrj and I see all your messages and never in our wildest dreams would have imagined the amount of support coming in from all corners of cyberspace, media, and the world! Figuring out how to navigate life in the most authentic and positive way has been such a long +37 yr journey for me, and at this moment, I feel I've reached some kind of karmic jackpot! It's 2019 (as my dad put it when I came out to him a few weeks ago), and a great time to be alive LGBT. #FilipinoPRIDE ??

Before becoming the social media sensation he is today, Mikey competed in the reality television show Canadian Idol. Since then he has become known for his song parodies and other hilarious videos that feature his Filipino culture and traditions.

Scroll down for more pics from Mickey’s Instagram page…

Dear friends, I've been doing Youtube now for over a decade, and it has flourished into something I never could have dreamed. Beyond my wildest expectations, God and the Universe cut out the quickest, most beautiful path to my dreams like the perfect Architects they are. 10 yrs in, I create content for four Youtube channels, run my various social media platforms, design and perform live shows, travel to vlog and work, running two businesses, including an e-commerce shop, all while doing my best to smile and not get grey hair and wrinkles. ? Morning to night, 7 days a week, the grind never stopped. But I find juggling all these tasks every day, requires me to be as mentally and emotionally stable as possible in order to keep productive, and the further I advanced in my career, the more I've been teeter-tottering in a growing critical balancing act, hoping nothing affects my mind and emotions great enough to topple me over. But recently, I've been feeling the pressure to put everything down, before I seriously lose my balance and lose everything. I would like to take a retreat of sorts. This year has been an enormous year of change so far for me, and I was hoping to shake up my daily routine a bit, just to give the creative factory in my mind a break from Youtube, so my machinery can be fine-tuned for its epic return at an unknown date. A week or two weeks? Not sure. Don't worry, guys. I'm totally fine, life is wonderful, and I will continue to dream up ways to make you happy while I'm on break. Would this be ok, guys? ? #YoutubeBreak PS – Don't worry, several daily vlogs, FB videos, and @AntsCanada videos, which are already currently in the pipeline, will be uploading as usual for awhile. I just might also be able to use this time to assemble a larger team so I'm not so frazzled doing everything myself. You can also keep up with me here on IG. Love you, guys! ❤

Take a leap of faith, and enjoy the ups and downs! ?‍♂️

OMG! I'm about to do smart people stuff and I seriously wanna puke! ??? I'm so nervous! In fact, I feel nervous poo brewing, and I need #Diatabs! ?? Regardless, I'm so honoured to be invited here, and will do my best to represent the ants and us ant keepers well! ??? ❤❤❤ #TEDxTalks @antscanada @tedx_official #TEDx #TEDxUPLB

In my line of work, as a social media artist and entrepreneur running a few businesses, where the grind never stops, not even on weekends, relaxation and mental vegetation is GOLD! Not complaining, feeling blessed. ❤

Over the years, I've been lucky enough to visit the beaches in Mexico, Cuba and the Caribbean Islands, Qatar in the Middle East, marvelous Maldives and Sri Lanka in South Asia, the simulated beaches of Dubai, the unreal beaches of Sabah, Malaysia, the awesome beaches of Sydney, Australia, American beaches from Virginia to Florida to California, heavenly Hawaii, gorgeous Guam, and even the ever pristine Palau in Micronesia, but this paradise called @Amanpulo in the Philippines in the Sulu Sea is hands down the best beach I have ever visited in the world! I cannot even describe how unreal this place is. It is my new favourite place on Earth! ? #Amanpulo #Philippines ???????

This TV heartthrob just came out as bisexual, says “I want to feel free”