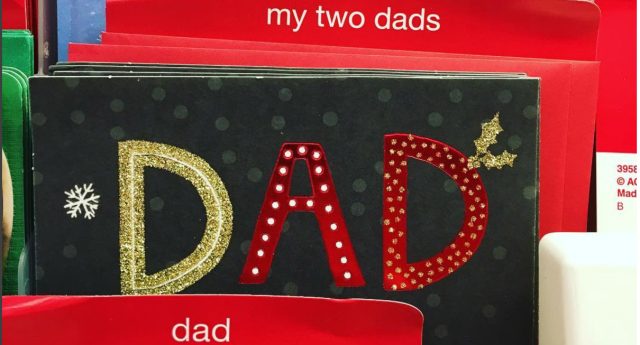 American supermarket chain Target has hit the nail on the head with its Christmas card selection this year.

The store has branched out its selection for the holidays and among the selection for ‘Parents” and ‘Dads’ was a section called ‘My Two Dads’.

Well done .@target. Thanks for being on the correct side of progress and equality. ?‍?‍?❤️

The cards were shared by Emmy winning actor Greg Rikaart, who was overjoyed at the growing selection of inclusive cards.

Rikaart wrote alongside the picture he shared “Well done @target. Thanks for being on the correct side of progress and equality.”

Rikaart came out in summer 2013 in celebration of the US Supreme Court ruling on marriage equality, and last year married his partner Robert Sudduth.

They had a son together on the 12th of June this year, who was conceived by surrogacy.

We fight hate, fear, bigotry, homophobia and injustice in the world with love, intellect and enlightenment. In the truest and most pure definitions of the latter words, it is with full hearts that Rob and I take great pride in introducing our son, Montgomery Argo Rikaart-Sudduth. He was born in Roseville, CA at 5:01pm on 6/12/16. He is light and love and magic. Monte, Rob, myself and Marcela, our trooper of a surrogate, are all doing fantastic.

The actor, who won the Outstanding Supporting Actor award in 2005, is currently on the cast of the soap operaThe Young and the Restless, playing Kevin Fisher since July 2003.

The card selection is not the only card celebrating equality over the holiday period.

In Northern Ireland, a ‘Big Gay Christmas Card’ was sent to ‘Santa’ to push on marriage equality.

The card, which was put together by a group of activists called Love Equality NI, was unveiled in the centre of Belfast.

The card, read: “Dear Santa, all I want for Christmas is equality.”

The group explained it was trying to “to enlist the support of Christmas shoppers and to spread a festive message of love which they hope will reach all the way to Stormont through the use of selfies and social media.

“Love Equality believes that civil marriage is a human right that should be extended to same sex couples in Northern Ireland, as already exists in the rest of the UK and Ireland.”