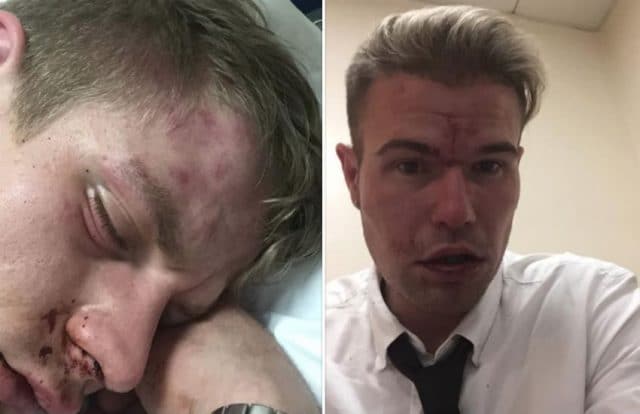 Three UK teenagers were jailed today after pleading guilty to attacking two train passengers because of their sexuality.

Two of the male teens were aged 16 and the other aged 17.
They attacked Phil Poole and Zbynek Zatloukal while they were heading home from a night out in Reading.

One of the 16-year olds walked through the carriage after the three boarded the train and spotted Poole and Zatloukal resting against each other.

He went back to inform the other two.

All three of them then returned.

Poole says he was woken up from sleeping on his boyfriend’s shoulder by a punch to the face.

The couple were punched and kicked several times. One was stamped on while the other was hit over the head with a glass bottle.

Zatloukal suffered a suspected broken eye socket and had to be stretchered out of the carriage.

The teens were charged and pleaded guilty to violent disorder after an investigation by the British Transport Police.

One of them also pleaded guilty to possessing an offensive weapon.

The Crown Prosecution Service argued the attack was motivated by the ‘hatred of the victims’ actual or perceived sexual orientation.’

They asked for the court to treat the incident as a homophobic hate crime.

This was accepted and each defendant was given a four-month prison sentence increase to six months, because of the hate crime element.