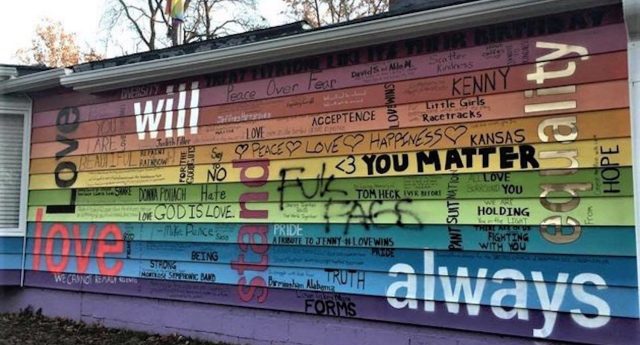 The Equality House has been attacked by thugs who left homophobic graffiti and smashed windows.

The Topeka, Kansas-based symbol of LGBT+ equality was established by Planting Peace back in 2013. Sharing its local vicinity with the hideously anti-LGBT Westboro Baptist Church, the building has been painted with rainbow colours in order to be seen as a celebration of community.

A same-sex wedding has taken place at the Equality House, as well as a lemonade stand hoping to advocate for peace. But Planting Peace founder Aaron Jackson said he was awoken on 23 October to hear noises in the Equality House.

He called police after he found pride flags scattered down the street and the words “Fuk Fags” painted on th side of the building.

Bullet holes were also discovered in the windows of the house.

Police are yet to identify suspects in the case, and the investigation is ongoing. But Planting Peace has launched a fundraiser in order to repair the damages at Equality House.

The fundraiser will pay for the damage to be fixed, as well as adding security features in order to avoid further attacks.

The graffiti has been left as it was found, but has sine been surrounded by messages of love in a symbol that the hate will be drowned out.

“We took some of the positive themes and messages and painted them on the house a weeks ago as an artistic, visual protest to hate, bigotry and violence,” Jackson told the Huffington Post.

“We realize the hate speech makes some people uncomfortable, but it’s important to get people to understand that those are the same feelings our LGBTQ brothers and sisters feel every day in the face of hate and discrimination,” he adds.