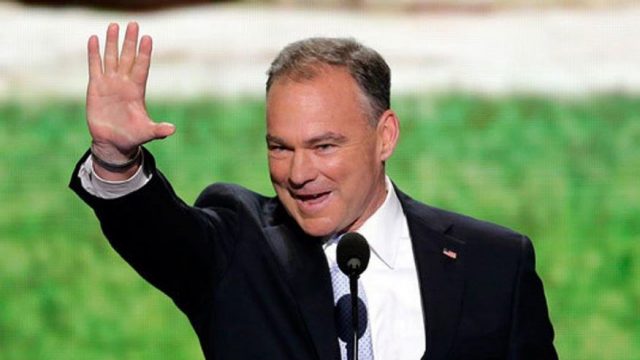 Dea Jones and Sharon McLeod, aged 64 and 61 respectively, met back in 2000 and took part in a commitment ceremony in 2002, more than a decade before same-sex marriage became the law of the land.

Speaking to Roll Call, Sharon said: “We hadn’t been in a hurry to make it legal [but] we really were hoping to do it as soon as we could before the Trump administration.”

The wedding, which marked the first time Kaine had officiated a same-sex couple, came about because Dea’s brother is friends with the senator and his staff – in fact, they were the ones who suggested the date.

Dea said: “How wonderful it would be on Jan 20th it would be to offer love and light by Sharon and I committing ourselves to each other.”

The partners encouraged other same-sex couples in America to get married, as the future for LGBT+ rights looks uncertain under Trump’s presidency – he once said he would “strongly consider” overturning equal marriage laws.

Dea continued: “Who knows what the future will bring. We’re not on the path I was hoping for. We would rather just secure our rights as a married couple.”

After officiating the wedding, Senator Kaine tweeted: “Hitched! Congrats to Dea and Sharon. Was honored to officiate their wedding tonight.”

Hitched! Congrats to Dea and Sharon. Was honored to officiate their wedding tonight pic.twitter.com/8y6BzG14kE