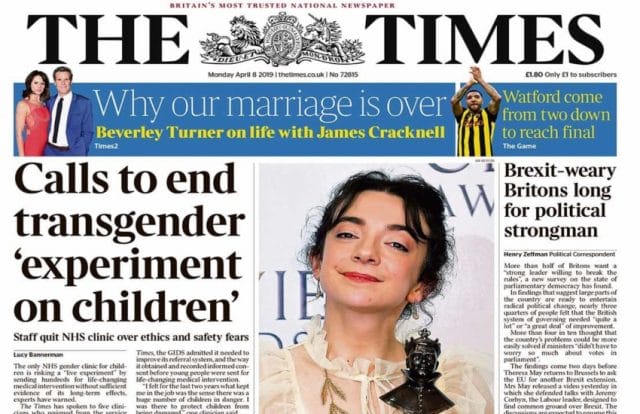 The editor of The Times has defended the newspaper’s coverage of trans people and rights issues.

John Witherow rejected allegations that this newspaper was biased against trans people or that it has published misleading articles on trans issues.

Witherow made the assertions while giving evidence at an employment tribunal in Edinburgh on Friday (17 May).

The tribunal was brought by trans woman and former night editor of the Scottish edition of The Times, Katherine O’Donnell.

O’Donnell claims that while working at The Times she faced discrimination and was overlooked for promotion because she is trans.

In the past, The Times and The Sunday Times have published several articles which trans rights advocates have labeled transphobic.

O’Donnell, who was made redundant in January 2018, is suing The Times’ publishers, News UK.

She worked at The Times for 14 years, during which she transitioned.

O’Donnell claims her dismissal was unfair and that she faced numerous instances of prejudice and discrimination by her colleagues – including senior members of staff – due to her gender reassignment.

She drew attention to a series of anti-trans news and comment articles printed in the newspaper. She claims the articles are indicative of a wider culture of transphobia in The Times’ newsroom.

The editor’s code is a voluntary industry-wide series of guidelines on journalistic standards and ethics. This includes warnings against misleading or prejudiced reporting on peoples’ sex or gender identity.

White used the example of a satirical article by columnist Giles Coren published in December 2017.

In his article, titled ‘There came three wise people of non‑binary gender’, Coren wrote about a mother identifying her baby ‘as male without consulting it’. The article also referred to someone ‘who could easily have been a woman or something in between’.

White, a specialist employment lawyer who is also a trans woman, compared this to the controversy over a tweet posted by radio broadcaster Danny Baker, which lead to his sacking from BBC Radio 2.

She asked Witherow why jokes about ethnicity were inappropriate, but mocking gender identity was acceptable.

Witherow said that the two cases were not comparable. However, he admitted that had he reviewed the column he would have removed the ‘something in between’ line as it was ‘not a very good joke’.

Witherow also said he had he seen it before pubication would have rejected a Times Scotland story about an apparent row over allowing trans men and women to share single gender cabins on an overnight sleeper train. The article was based on a tweet and comment from the website Mumsnet, the Guardian reports.

Despite this, Witherow said that such instances were very rare and said the overwhelming majority of The Times’ coverage was of the highest standards. He also denied there was a culture of transphobia at the newspaper.

The Times has come under fire from trans rights supporters on numerous occasions in recent years. Many trans rights advocates have accused The Times of publishing biased or misleading coverage on trans issues.

This includes an outcry in April after The Times published four articles on trans children. In the issue, one article referred to therapy for trans children as ‘an experiment’. Another article included a quote in which treatments are compared to ‘conversion therapy for gay children’.

Trans rights groups have similarly slammed the newspaper for coverage of NGOs and support networks for the trans community.

This is also not the first time Witherow’s judgment has come under scrutiny with regards to LGBTI issues.

In 2010, the editor defended columnist AA Gill after the latter described openly gay BBC Sports presenter Clair Balding as a ‘dyke on bike’ in television show review. Balding complained to Witherow following the article’s publication, though was ‘appalled’ by his response.

‘In my view some members of the gay community need to stop regarding themselves as having a special victim status and behave like any other sensible group that is accepted by society,’ Witherow said in a statement. ‘Not having a privileged status means, of course, one must accept occasionally being the butt of jokes. A person’s sexuality should not give them a protected status.’

Balding later took her complaints to the Press Complains Commission (PCC). The PCC upheld Balding’s complaint, saying some of the language used in Gill’s article was used in a ‘demeaning and gratuitous way’.