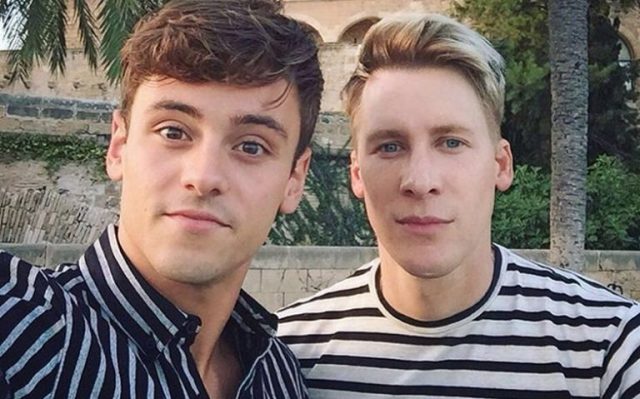 The couple went on a seven month break after struggling with their long distance relationship.

Tom Daley and Dustin Lance Black have admitted for the first time that they split up for a period of time last year.

The Olympic diver and Academy Award-winning writer are engaged, but their plans for a dream wedding nearly crumbled during a difficult period in their relationship.

“Lance and I had a period of time apart, and then coming back together and realising we’re meant for each other,” Tom told The Sun.

“We’re soulmates — and the only way that we were going to get back to that point was to be honest, open and share everything that happened in our time away from each other.” During that time apart, Tom admitted to sending intimate photos and a video to another guy, but he told Dustin about it as soon as they got back together.

“It’s totally crucial to us that we are completely and totally open with each other,” Tom said.

“I don’t think I’ve done anything more or less than any other 22-year-old has done. Lance and I have such a strong connection that again our honesty and openness is so important.”

Explaining their reason for the seven month split, Tom said: “It was the two biggest years of our lives work-wise — it was my Olympic year and Lance was filming his mini-series for ABC called When We Rise, and distance can be hard sometimes.

“We made these decisions because it was something we felt was the right decision to make for us at the time — but in time it has actually made us grow stronger together. “We feel like it was the right thing. I couldn’t now imagine living without Lance. And that’s why we are getting married.”

Dustin added: “Tom and I talked about anything and everything that went on. That’s the secret to how we are so close and can survive tough times.

“I was out of the country for about seven months last year — I’d been back and forth before that too, and in that time Tom and I took a decision to take time off.

“We didn’t tell a lot of people and it wasn’t the easiest time for us — so what Tom did in that time was his personal business.

“But as soon as my production was done we realised we can’t live without each other, and adjustments had to be made to make sure that we are never separated for any reason, including work, ever again.”

Tom and Dustin now plan on finally tying the knot later this year.