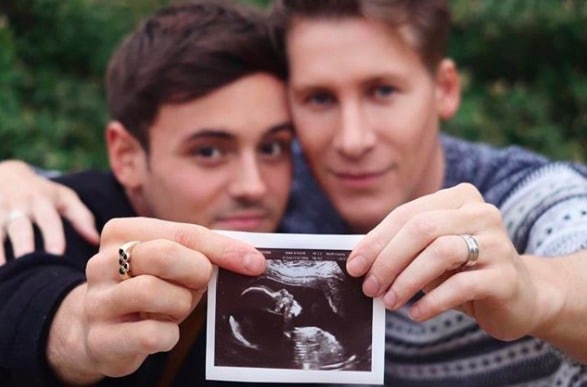 This just in: Tom Daley and Dustin Lance Black have just revealed the sex of their baby. Not just that, but they’re hitting back at critics over their decision to use a surrogate.

“We’re going to have a little boy!” Tom revealed in a new interview with Fearne Cotton’s podcast Happy Place.

The couple confirmed that they conceived the child via an egg donor using another woman as a surrogate. Who the father is will remain a mystery (for now) as they both gave sperm samples.

“Try as we did and have, we just couldn’t get pregnant on our own!” Lance added. “Every effort was made, let me tell you.”

Related: People are really pissed off about Tom Daley and Dustin Lance Black having a baby

So what about all that awful criticism they received when they first announced they were expecting a baby? In case you forgot, the internet wasn’t exactly beaming with well-wishes:

Correction: Tom Daley and Dustin Lance Black announce that they have bought a baby. The couple have bought a baby taking advantage of their economic privileges on a woman who, undoubtedly, does it by her own choice and not by necessity.

Tom Daley announces he is expecting 1st child. How was it conceived Tom did ur “husband” ram hus cok up ur arse deposit sperm in ur rectum is that how we conceive kids these days? Your NOT a mother or father your a FAIRY who is being given a child like it was a pet dog

"Tom Daley and Dustin Lance Black announce that they're having a baby: " No they aren't. #Biology

Lance said he was genuinely “shocked” by the hateful responses.

“I’ve been in the LGBT rights battle for a long time now and I’ve faced a lot of discrimination,” he explained. “It hasn’t been an easy path and I’ve gotten quite used to that. But I was shocked to have this response to us having a child.”

It’s difficult because you see stuff online. We know we have wanted a kid more than anything in the world. When people judge about us using a surrogate and stuff… there are people who can’t have kids, and I don’t think there would be as much drama if it was a straight couple.

Take Kim Kardashian, for example – she used a surrogate and there wasn’t any issue with it. There is an element of difference in terms of the way we’ve been treated.

Luckily, there seem to be a lot more well-wishers this time around…

Just listened to @Fearnecotton first two podcasts with @TomDaley1994 @DLanceBlack and @Dawn_French They are really great and so nice to listen to something different and inspiring! ?☀ #HappyPlace

Adam Rippon joins an exclusive club, along with Tom Daley and Sam Smith, who has been openly criticised by gay men for a number of reasons.

This was cuuute (and funny too!)

Maybe one day you could film the husband tag with Lance… ❤

Omg just listened to @DLanceBlack and @TomDaley1994 interview with @Fearnecotton Such a beautiful & honest conversation. I’m beyond happy for U both on Ur baby news. Your little baby boy ? will never want for anything because he will be so loved, that’s what a child needs ❤️

Is there a famous gay man that gay Twitter does NOT want to demolish?

We get it. You dont like Tom Daley, Sam Smith, Adam Rippon….keep your negativity to yourself. pic.twitter.com/x38voe7VQw