Home Gay Stars Tom Daley ‘doesn’t care’ if people don’t approve of him having a... 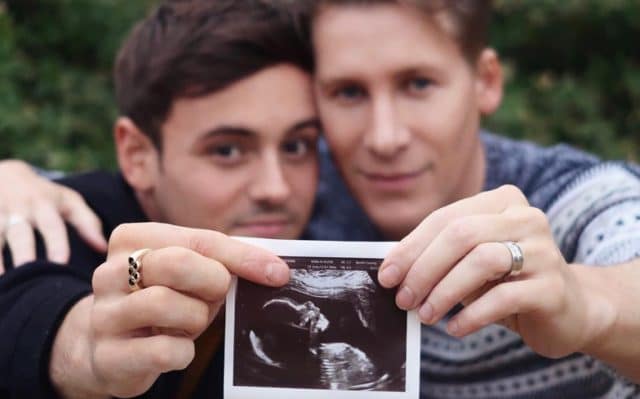 Tom Daley wants you to know that he doesn’t care what people think of him becoming a dad.

The 23-year-old Olympic medal-winning diver was met with a barrage of hate when he and husband Dustin Lance Black announced earlier this year that they were having a baby boy together via surrogacy.

While a Daily Mail columnist questioned where the mother was and asked readers “please don’t pretend two dads is the new normal”, controversy-courter Katie Hopkins tweeted that their “one-click baby” would get “next day delivery” from Amazon Prime.

But despite all the hate, Tom explained during an interview with The Times that he’s feeling pretty good about his future as a father, and that he’s learned to ignore the bigots who try to bring him down.

“We have an egg donor and a surrogate and we feel very lucky,” he said.

“I am able to live my life without worrying what people think. People say whatever they say. I get tons [of abuse] every day, but at the end of the day, I’m married with a kid on the way and I don’t care what anyone says.

“I don’t care if they don’t like it. It took me a long time to get to that place but I am here. I think, ‘Whatever’.”

While there’s still three months until the due date, Tom says the prospect of becoming a father has “changed him” already.

“Even flying out on the plane I am normally fine with turbulence and just fall asleep, but now I’m thinking, ‘It’s not just me’. Holy crap, I have to worry about looking after a human being and being in charge of making sure they survive and thrive,” he said.

“Diving is no longer my number one [concern]. My child is number one and diving is number two and, for me, that order might help.

“All of a sudden coming to training is no longer my crazy, chaotic time; it’s the quiet time without a screaming, pooping child.”

Back in February, Dustin also addressed the hate the couple have received since making their announcement, promising that his reaction will “not include anger or hate” and will instead focus on love.

“For me, the path forward is lit with curiosity, listening, correcting the record when possible, and as best I can, leading with an example of strength & love,” he wrote at the time in an Instagram post.