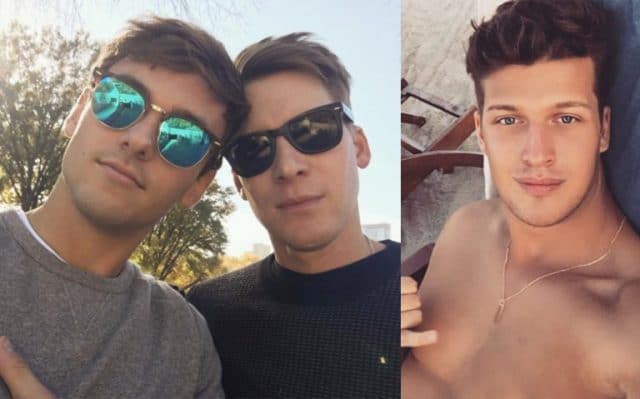 Less than a month after Tom Daley spoke about a brief cyber fling he had with a fan during a break in his relationship to Dustin Lance Black, it’s now been reported that he had been seeing someone else a year previously.

The 22-year-old star was allegedly having an affair with British model Edward William over the course of 18 months up until 2015, with sources saying that it was purely a “physical relationship”.

“They live near each other in London and caught each other’s eye,” an insider told The Sun.

“Ed obviously knew who Tom was, and was single at the time, so sent him a message.”

“Others would say, ‘Lance is away, are you going to be about?’

“Ed told them it was a purely physical relationship with not much emotion involved.

“He said Tom was very confident and forward with a huge sex drive.”

The tabloid also reports that Tom and Ed’s alleged affair was an “open secret” amongst the local gay community, while also suggesting that Dustin and Tom may have an “agreement” in their relationship.

“Ed met Dustin socially at the start of the friendship, but he thinks he did not know Tom was contacting him privately,” the source said.

“It would always happen when Dustin was away and would be quite short-lived.

“They would hook up for half an hour or an hour and that would be it.

“Tom would rarely talk about Dustin to Ed, except to say that he was away. His and Tom’s meetings had an air of secrecy about them.”

They added: “Ed is not sure about Tom and Dustin’s relationship and has said that perhaps they have an agreement that each of them can do what they want.”

Tom Daley has declined to comment on the story, while Ed said to The Sun: “I do not wish to discuss this.”

Meanwhile, Tom and Dustin are planning to finally tie to knot together later this year.