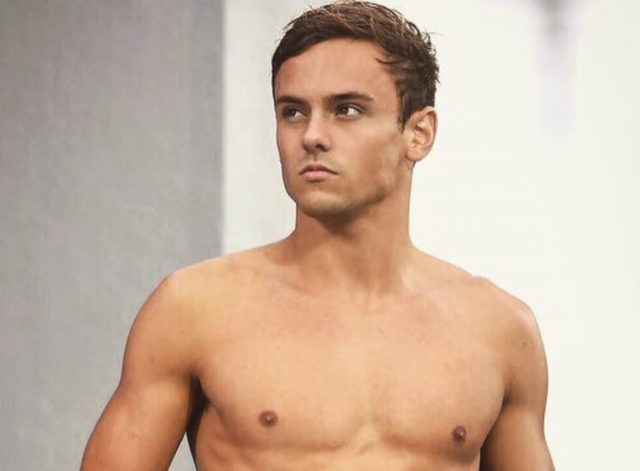 The diver has revealed he sent explicit videos to 23-year-old fan, but being honest with Dustin has made their relationship stronger

Tom Daley has revealed that he had an online explicit encounter session with a fan at a time when he and fiancé Dustin Lance Black were taking a seven-month break from one another.

The revelations came in an interview with The Sun after Snapchat video emerged of Tom stripping for the 23-year-old fan.

It was apparently filmed shortly after the Olympic medal-winning diver’s engagement to the Oscar-winning screenwriter and director.

However, after confessing all to Dustin, the pair say that the incident has only made them stronger.

Dustin told The Sun: ‘Tom and I talked about everything, anything and everything that went on. That’s the secret to how we are so close and can survive the tough times.

‘I mean, being very frank, I was out of the country for about seven months last year – I’d been back and forth before that too, and in that time Tom and I took a decision to take a bit of time off.’

During that time, Tom sent the six-minute, explicit video to the fan, who lives in Liverpool in the north of England.

Tom had contacted the man in February 2016 by sending him a direct message on Instagram, telling him he was ‘fit’, before sending him his number. The two remained in contact for around 11 months.

He said that the pressures of the long-distance relationship with the US-based Black had led to the temporary split.

‘This will absolutely never happen again now that we’re getting married.

‘The date is set, and we’re raring and ready to go for that wedding now.

‘In the modern world this is what can happen’

‘It was the distance. It’s not like I actually met up with anyone.

‘I’m 22 years old, and if you talk to someone through social media it is what it is. It was nothing more than that. We never physically met.

‘But in the modern world this is what can happen — things are more accessible online, and distributed, and they spread like wildfire.

‘People are just exploring and finding out what can be done and how easy it is to not even think about what you’re doing online.

‘Me and Lance after working through that distance through the amount of time we’ve been together, sometimes it takes something like a little bit of time apart to realise how fond you are of each other.

‘That’s why we’ve been enjoying planning our wedding so much in the last few weeks.

‘We don’t have secrets in our relationship. We’re honest and open about everything. When we were back together I told him everything.

‘Lance and I had a period of time apart, and then coming back together and realising we’re meant for each other.

‘We’re soulmates — and the only way that we were going to get back to that point was to be honest, open and share everything that happened in our time away from each other.

‘I don’t think I’ve done anything more or less than any other 22-year-old has done. Lance and I have such a strong connection that again our honesty and openness is so important.’

‘What Tom did in that time was his personal business’

Dustin added, ‘We didn’t tell a lot of people and it wasn’t the easiest time for us — so what Tom did in that time was his personal business.’

Many people – of all sexualities – now routinely swap intimate photos and videos with others online, so it’s not known why the pair chose to speak specifically to The Sun about the incident, or if the newspaper has copies of the explicit video and images.

The late, former Boyzone singer, Stephen Gately, said that he didn’t choose to come out of his own free will in 1999, but because the right-wing tabloid threatened to reveal details of his personal life anyway unless he gave them an exclusive interview.
GSN has approached Tom and Dustin for further comment.