Home Gay Stars Tom Daley hits back at those who ask why he and Dustin... 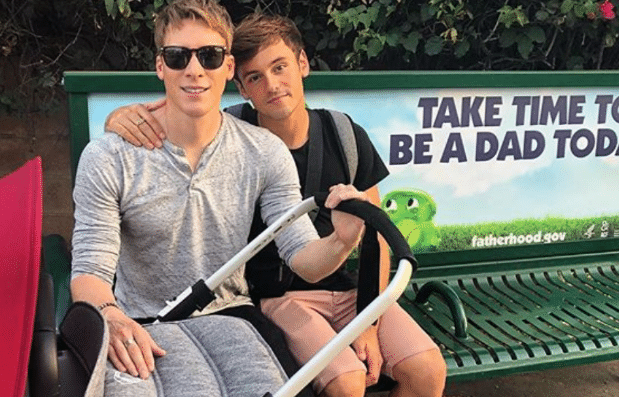 ‘You wouldn’t say that to a straight couple’

Tom Daley has hit out at people who ask he and husband Dustin Lance Black why they chose to have a baby via surrogacy over adoption.

In a new interview the Olympic diver points out that people ‘wouldn’t say that to a straight couple.’

Speaking to The Telegraph, Tom explained: ‘Lots of people say, “why don’t you adopt?”. You wouldn’t say that to a straight couple. You wouldn’t say: “Why do you deserve to have a biological kid?”‘

The sports icon furthermore discussed he and Dustin’s relationship with the surrogate of their baby son, Robert Ray.

‘She becomes such a massive part of your life for those nine months,’ he said. ‘Some don’t want long-term relationships [with the parents]. We talk to ours all the time.’

On not wanting to find out who between he and Dustin is Robert Ray’s biological father, Tom meanwhile continued: ‘One thing we’re very strongly leaning towards is that we don’t want to know. He’s ours.’

Last month, it was reported that Tom was working with the BBC on a documentary about surrogacy.

News of Robert Ray’s birth broke earlier this summer, on 30 June. Tom and Dustin married in a lavish Devonshire ceremony on 6 May 2017.