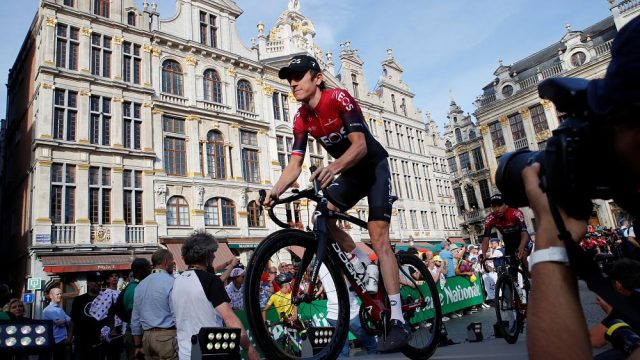 Some 75,000 people gathered in Brussels on Thursday for the presentation of the teams competing in this year’s edition of the Tour de France ahead of the race’s kickoff on Saturday.

Twenty-two teams — each comprising eight athletes for a total of 176 riders — will travel through Belgium and France as part of the 106th edition of the legendary cycling race.

The sporting event kicks off in Brussels this year to mark the 50th anniversary of Eddy Merckx’s first victory on the Tour. Nicknamed “The Cannibale,” the Belgian native remains of the most beloved athlete in his country, having won five of the Tour de France in his impressive career.

The race will conclude on July 28 on the Champs Elysées’ cobblestones in Paris. By then, the riders still standing will have peddled 3,480 kms across some of France’s most beautiful, and harshest, landscapes.

The man to beat is reigning champion Geraint Thomas (Team Ineos). But despite the notable absence of fellow British riders Chris Froome and Mark Cavendish, the 33-year-old title-holder should still have some stiff competition in the likes of Adam Yates (MITCHELTON – SCOTT), Thibaut Pinot (GROUPAMA – FDJ) and Nairo Quintana (MOVISTAR TEAM).

Each will be eyeing the coveted yellow jersey, which celebrates its 100th anniversary this year.