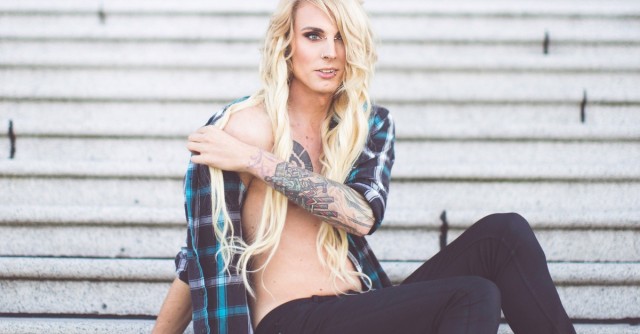 Canadian trans woman Courtney Demone documents the growth of her breasts as she goes through hormone replacement therapy (HRT), and she is posting topless pictures on social media (Facebook and Instagram) testing their censorship policy and at the same time what is their approach towards her as a trans woman. Courtney has been undergoing the hormone therapy for only few months, so her breasts are not changed yet, but Facebook and Instagram, both have policies banning images of female nipples (except cases of breastfeeding or post-mastectomy images). This aspect marks another question of the project: how do social media see gender?
“Their polices are to censor topless women’s bodies and they’re not doing it to me, what assumptions are they making about me?” said Courtney. Even if she took the #FreeTheNipple campaign one step further with the hash tags #DoIHaveBoobsNow and #FreeAllBodies, Courtney thinks the campaign has failed, because the whole point was everyone to be included:
“#FreeTheNipple has failed to show the diverse ways in which people with differing bodies are sexualized, fetishized, exoticized and shamed. It has also failed to recognize that baring her nipples doesn’t mean freedom for every woman.”
I think that one aspect was clarified, that of how Facebook and Instagram see gender, or rather transitioning from one gender to another. The fact that she was not banned yet despite the fact that she is a trans woman and posting photos that show her nipples, says it all. But, by the next year her breasts will be grown and then we will be able to see the results: will they ban her? Will they change their policies afterwards? She wants this project to be exclusively about the freedom of women to post topless pictures and trans women to be included in whatever policies social media have regarding women. Courtney also mentioned, that the documenting has nothing to do with the medical aspect of the transition.