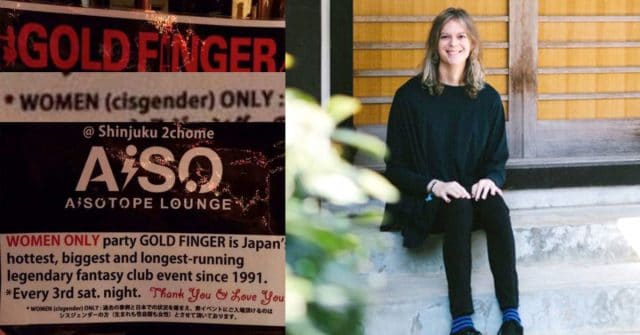 Gold Finger, a Japanese women-only event, has been accused of denying entry to transgender women.

Gold Finger bills itself as “Japan’s hottest, biggest and longest-running fantasy club event since 1991,” but in recent weeks its slogan has gained a sour footnote: “women (cisgender) only.”

Elin McCready, an American trans woman living in Tokyo, attempted to visit Gold Finger in April to support a friend who was playing a DJ set.

“When she invited me I told her that I wasn’t sure I’d be able to get in, because I’m not a cis woman,” McCready wrote in a widely-shared Twitter statement.

“Ordinarily I wouldn’t have gone, but my friends wanted me there so I went.”

Upon reaching the venue, a male bouncer checked McCready’s ID and announced: “Well, it does say F, but…”

“I said that that was rude and insulting and he just stared at me,” McCready told PinkNews.

A staff member came to the door and asked McCready if she was trans. When she said that she was, she was told that she wouldn’t be able to enter the bar.

“She was extremely apologetic and told me she didn’t agree with the policy but said she had no choice. She was very nice actually.”

Staff then summoned organiser Chiga Ogawa. McCready said she “glanced” over before “yelling” at her DJ friend, who had told her that she would no longer be performing.

“I asked her why she told Dora I could get in and she said very emphatically, ‘I never said that. Never.’”

Since McCready shared her story online, trans women and allies have launched a boycott of Gold Finger. In response, McCready and her wife have started their own all-inclusive night, WAIFU.

“The feedback from the local community has been amazing,” McCready said.

“People here have been in need of a proper queer and trans space for a very long time, so we decided to just make a safe space for ourselves.