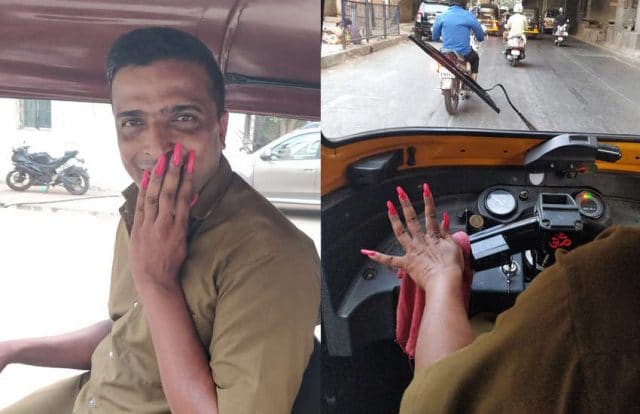 The story on Manju, a transgender auto-rickshaw driver in Mumbai has gone viral on social media.

‘So happy to meet this gracious autowaali from Bombay’ Poonam Kirchi wrote.

‘Sister, I am preparing for Eid’, Manju replied in ‘a sweet humble voice’.

Poonam Kirchi talked to Manju and found out she has a boyfriend. Manju used to work in a hotel but was fired due to her sexual orientation and gender identity, according to Poonam Kirchi’s Facebook post.

Now, she works as a rickshaw driver but dreads working at night as passengers tease her.

‘So proud to see her fight against all odds and rides like a queen on the street of Mumbai’ Poonam Kirchi wrote.

‘Hats off to Manju’, one user wrote. ‘Amazing nails.. And her smile’, another said.

India’s newly-elected government plans to re-introduce a controversial within its first 100 days in office.

Indian transgender group, Sampoorna, described the bill as a ‘great travesty of justice’.

‘In the name of empowering us, this bill further attempts to criminalize and regulate our identities through arbitrary and draconian means’ a spokesperson told Gay Star News.

‘It must be opposed at all costs’.

In the recent general elections, transgender voters were allowed to cast their ballots as a third gender for the first time

A handful of trans and intersex candidates also ran for office. made headlines as the first-ever trans woman to run in the general election.

aslo joined one of the country’s largest political parties.

also made history earlier this year by leading a religious procession.

Violence continues, however. One trans politician running for office in Hyderabad .

Earlier this year, a man in her temple.