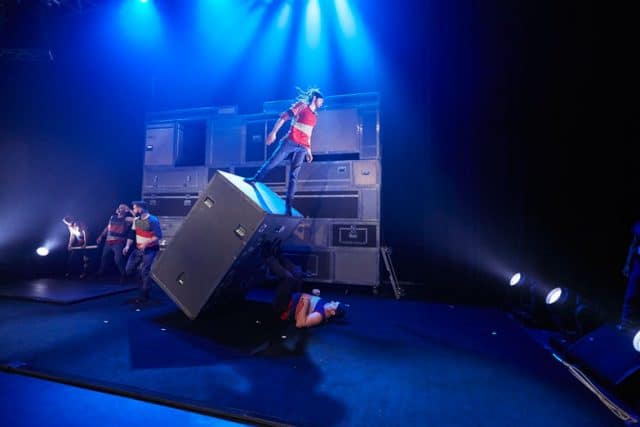 Transit is a quirky, high-concept theatrical circus show which features six talented performers, each bringing their own unique skill to the table. Whether that be aerial acrobatics, juggling, or a good old-fashioned display of strength, each is showcased through a number of amusingly-presented and frequently dazzling set-pieces.

Unusually, there’s a fair amount of emphasis on the story behind the show; it focuses on the highs and lows of the touring lifestyle, and the joy and camaraderie of travelling and working together. When our cast realise that Transit could be the last show they perform as a troupe, each sets their own personal ambition to deliver over the course of the evening. It works reasonably well as a device to link one scene to the next, although at times feels a bit contrived or more of a distraction. In a largely playful show, some of the more sombre moments jar a little.

We were wowed by many of the initial tricks. The diabolo routine impressed, with some technically-demanding throws and catches; the hoop spinning set-piece, performed atop a stack of flight cases, was mesmerising; while the whole ensemble taking part in a skipping act, involving multiple ropes being utilised at any given moment, was a showcase of impeccable timing and skill.

However, it did start to lose its way in the middle. The introduction of each performer’s unique talent was impressive, but throughout the show we did see some tricks repeated with only a slight variation; these were less impressive second time around. Furthermore we did spot quite a lot of mistakes being made – in a show like this we’re willing to forgive a handful, but there were rather more than we’d have liked over the course of the evening.

Thankfully the finale was worth persevering for. It involved a large trampoline being placed next to a wall of flight cases; the male members of the troupe then took it in turns to bounce off the trampoline and create the illusion they were walking up the side of the wall to reach the top. It was a genuinely impressive visual trick, augmented with the addition of twists, turns and flips as the sketch played out. In a show built largely from conventional circus acts, this felt like a genuinely unique and fresh concept.

Transit is, for the most part, an impressive and entertaining show. There are a number of shortcomings – it loses momentum for a while in the middle, the story sometimes misses the mark, the performers make more mistakes than we’d like – but it still offers a lot to enjoy, and the grand finale is absolutely worth the wait.