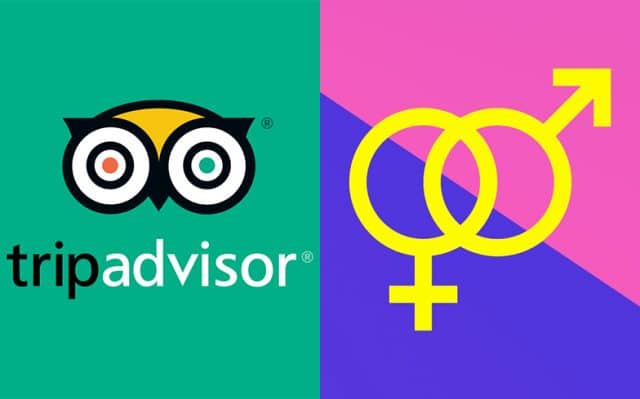 The travel platform, largely known for its user-generated restaurant and hotel reviews, have issued a cease and desist order to the Super Happy Fun America, the organisers of a controversial ‘Straight Pride’ parade in Boston.

On their website, Super Happy Fun America lists 25 companies as “prospective corporate sponsors” including Google, Twitter, Amazon and YouTube, several of whom have threatened legal action in an attempt to disassociate themselves from the event.

TripAdvisor have joined that growing list, as they recently issued a letter to John Hugo, the founder of Super Happy Fun America, explaining that any claims about its potential sponsorship of ‘Straight Pride’ are false.

Related: Nine reasons why there doesn’t need to be a ‘Straight Pride’

With this being the age of social media and viral moments, however, TripAdvisor decided to have a little fun with their warning, and featured the titles of several LGBTQ anthems from artists like Lady Gaga and Madonna in the letter.

“I’m Coming Out and saying this clearly: you are infringing upon TripAdvisor’s intellectual property rights. Further, your statement that you are ‘in negotiations’ with TripAdvisor as a ‘potential sponsor’ is completely false,” wrote Vice President Bradford Young.

“We have become a well-known brand for our reviews of hotels, restaurants, experiences and even the occasional YMCA, but we weren’t Born This Way – we obtained that recognition through significant advertising and promotion since as early as 2020.

“You Need To Calm Down – you are not sponsored by, associated or affiliated with TripAdvisor in any way, and thus, your use of our marks could confuse the public as to an affiliation with TripAdvisor.

“Have A Little Respect and remove those statements. TripAdvisor and I Will Survive without being associated with your event.”

The letter requests that Super Happy Fun America removes the TripAdvisor brand from the “potential corporate sponsors” section of their website, or risk “legal action” from the travel company.

“Please know and Believe that we take this matter seriously and look forward to your prompt compliance,” the letter ends.

TripAdvisor aren’t the only company to threaten legal action against the organisers of ‘Straight Pride’ for listing them as a potential corporate sponsor – streaming giant Netflix also denounced the event with a brilliant takedown.

In their email to the ‘Straight Pride’ organisers, Netflix wrote, “You should know that we’re unafraid of bullies. Our legal department is here, it’s queer, and it’s telling you to steer clear,” and ordered them to “immediately” remove their logo from the website.

Super Happy Fun America hit back with a post titled ‘Netflix hates the straight’, in which they accused the streaming service of being “staffed by gay supremacists” and added: “Netflix is a heterophobic company steeped in hatred and bigotry.”

We have to laugh.