Home Gay Life Trolls are using the rainbow flag on a pedophile flyer and this... 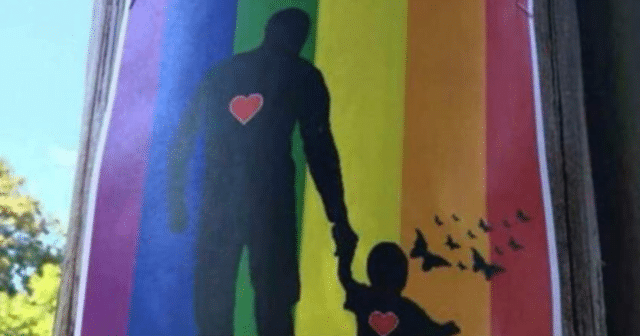 The poster states ‘pedophiles are people too’

Yet another flyer is misusing the rainbow flag to promote ‘pedophiles’ rights’ in an increasingly worrying trend.

The poster, appeared around Willamette primary school in Oregon last week, features the silhouettes of a man and a child holding hands against a rainbow background. It also states ‘pedophiles are people too’.

In a disturbing side note, the rainbow flyer reads that ‘love is love’, a popular LGBTI slogan.

A worrying trend is linking pedophilia and homosexuality

Internet trolls have long piggybacked on the stereotype maliciously associating the gay, lesbian, bi and trans community with sexual predators.

American actor James Woods, who has voiced his conservative views on Twitter on more than one occasion, posted a picture of the flyer on his page. He simply captioned it ‘And so it begins…’.

And so it begins… pic.twitter.com/ku6FQpBbAO

The image immediately sparked the outrage of Twitter users.

One suggested this is a prank by controversial imageboard website 4chan’s /pol/ board, known for its sexist and racist content.

It is. The alt-right trolls of 4chan's /pol boards came up with this nonsense months ago, there's documented evidence on the site. It's more than a prank though; look at all of the gullible people who're only too happy to believe this.

‘The alt-right trolls of 4chan’s /pol/ boards came up with this nonsense months ago,’ they tweeted.

They also added: ‘It’s more than a prank though; look at all of the gullible people who-re only too happy to believe this.’

‘Reminder that these campaigns are strategically planned by the alt-right and anti-lgbt groups to tie lgbt+ people to pedophilia,’ another tweeted.

‘Please don’t fall for it,’ they also wrote.

Another user replied with a picture allegedly posted by 4chan explaining their strategy.

‘If [LGBTI people] want to demand that society accept their horseshit identities, then it’s time we slip in one of our own,’ the image says.

‘How do we do this? We convince them that Pedos deserve rights too.’

‘At a time when we are facing homophobia, transphobia, it’s not helpful for these kinds of harmful messages to be disseminated out.’

The Oregon flyer is just the latest example of exploitation of the rainbow flag, a historical LGBTI symbol.