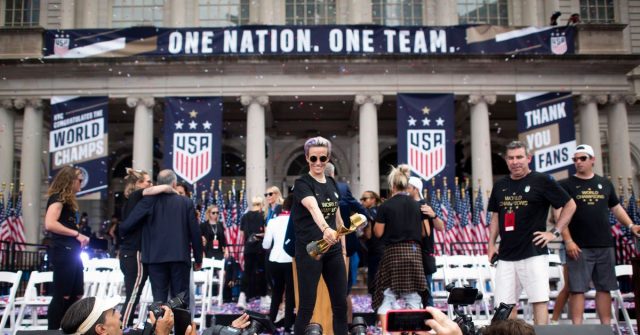 When New York City nicknamed the stretch of Broadway reserved for victory parades the “Canyon of Heroes,” they couldn’t have picked a better phrase to describe today’s celebration of the US Women’s National Team’s World Cup championship. The U.S. Women took over Lower Manhattan and LGBTQ stars like Megan Rapinoe, Ali Krieger, and Ashlyn Harris were at the forefront of the festivities.

For starters, Rapinoe came up with the most succinct and accurate caption for any picture of her and the World Cup trophy…

WOMEN OWNING THEIR VICTORIES AND PRAISING THEMSELVES IS A WHOLE VIBE @mPinoe, @Ashlyn_Harris 2020!!!!#USWNTParade pic.twitter.com/EHM9SxhLIQ

If U.S. Soccer doesn’t immediately begin printing “I DESERVE THIS” t-shirts, the entire marketing staff should be sacked.

Speaking of that particular organization, the USWNT decided that their party didn’t have enough confetti. So they decided to make some more out of their Equal Pay lawsuit.

The USWNT using their equal pay lawsuit as confetti for a parade celebrating them as the best women’s soccer team on the planet is an all-time flex. #USWNTParade pic.twitter.com/IUnwsxVrkt

That’s Harris throwing pages of the lawsuit into the trees and Allie Long sampling a page, presumably because she likes the taste of justice.

Pages from the lawsuit were also put to good use by the creator of this inspiring sign:

One of my favorite signs from the #USWNTParade this morning. The poster’s background: The players’ lawsuit against US Soccer. #EqualPay pic.twitter.com/mwSCL1JFvG

Equal Pay fever ran so rampant, even certain mayors caught a bit of it…

Thanks to Alex Morgan, New York City might also have broken a world record for most people pantomiming tea sipping.

Somebody call Guinness. Or Lipton.

As for Morgan herself, she’s got a new drink of champions:

Alex Morgan out here having a spot of tea at the USWNT’s championship parade.

During the rally at City Hall, Rapinoe summed up what the USNWT and inclusion are all about

USWNT star Megan Rapinoe praises teammates: “We have pink hair and purple hair. We have tattoos and dreadlocks. We got white girls and black girls and everything in between, straight girls and gay girls.” https://t.co/9KtjDoVVnD #USWNTParade pic.twitter.com/F8Wn5pPlhU

Shortly thereafter, she also became the rare famous person to declare that she isn’t running for president.

“There’s no other place I would rather be even in the presidential race,” Megan Rapinoe says at the #USWNTParade. “I’m busy, I’m sorry” #TickerTapeParade pic.twitter.com/mL7QTUQB1m

But that’s OK. Because this fan had a better idea…

This teenager’s sign for @mPinoe made me cry a few happy tears ️‍ pic.twitter.com/kBNQ2jH2ZC