Home Gay Life Troy Aikman Is Still Not Over Skip Bayless Speculating He Might Be... 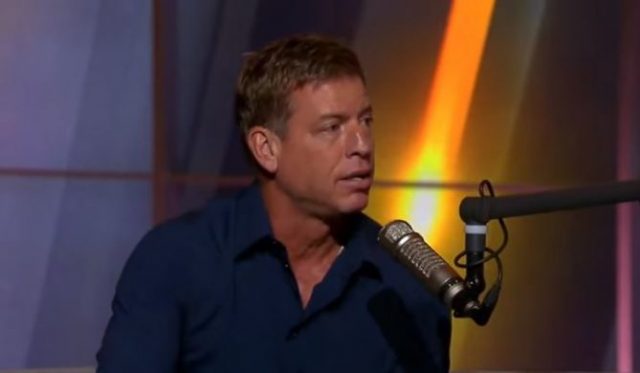 Troy Aikman is holding firm to his grudge against writer-turned-talking-head Skip Bayless over decades-old speculation that Aikman might be gay.

“To say I’m disappointed in the hiring of Skip Bayless would be an enormous understatement,” Aikman told the magazine. “Clearly, [Fox Sports president of national networks] Jamie Horowitz and I have a difference of opinion when it comes to building a successful organization. I believe success is achieved by acquiring and developing talented, respected and credible individuals, none of which applies to Skip Bayless.”

“I didn’t spend much time pondering the Aikman rumor until October of 1995, when several members of the Switzer camp told me about new ‘incidents.’ They said the team had been informed ‘by the police’ that Aikman ‘had been in some places he shouldn’t have been.’”

The Ringer reports that Bayless then spoke with Aikman’s agent, a Dallas police source, a team source, and Aikman’s sportscaster pal Dale Hansen. They all said there was no evidence Aikman was gay, and Bayless then wonders aloud why the rumor should matter. He also writes that there were rumors that Switzer himself might be gay, that he sometimes stayed in a hotel in Dallas’s “gay district.”

“Maybe I imagined this, but I began to feel subtle pressure from the Switzer camp to ‘tell the truth’ about what a ‘fraud’ Troy is,” Bayless writes. “In December, Switzer supporters would wonder if ‘the truth’ about Troy had made him a ‘very troubled young man’ and helped cause his slump. My response: ‘What exactly am I supposed to tell the truth about?’ I had no proof of ‘the truth.’”

Aikman has called homosexuality a “lifestyle choice,” implied he might inflict physical violence on Bayless if he ever were to see him, while also suggesting Bayless himself might be gay.

Things might get awkward around the Fox Sports water cooler.