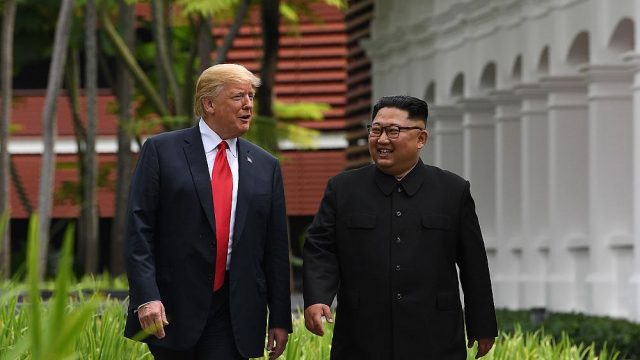 SEOUL, South Korea – President Donald Trump and North Korean leader Kim Jong Un were gearing up Sunday for an historic handshake and brief meeting in the heavily fortified demilitarized zone dividing North and South Korea, an unprecedented encounter that nonetheless comes despite a lack of measurable progress on denuclearization.

Standing with Moon at the Blue House, South Korea’s equivalent of the White House, Trump said that he and Kim “understand each other, I do believe.” He said that both he and Kim wanted to hold the meeting “from the beginning.”

“He understands me, and I believe I maybe understand him,” Trump said. “Sometimes that can lead to very good things.”

Yet the brief run-in between the leaders in the DMZ was expected to be more of a photo-op than a substantive session, lasting just a few minutes. National security hawks and many of Trump’s critics have warned that such meetings give legitimacy to Kim and remove pressure needed to get the North to rid itself of nuclear weapons without accomplishing anything concrete.

Trump’s initial invitation to Kim came on Twitter on Friday. Trump is the first U.S. president to meet a North Korean leader while in office, having met with him twice before, and would mark another historic first by meeting with him in the no-man’s-land between North and South.

Moon, a liberal in South Korea’s political world who has pushed hard for more engagement with the North, announced while with Trump that he planned to accompany the U.S. president to the DMZ. He said even a handshake between Trump and Kim would be “an historic event.”

“I hope that there will be progress made between the leaders of the different countries, together with the people of the Republic of Korea,” Moon said through a translator. Earlier, he said: “I hope that you will be able to achieve great progress and dialogue with Chairman Kim.”

North Korea’s government has not confirmed that the two will meet, although it reacted to Trump’s initial offer by saying it was an interesting offer but that it hadn’t yet received an official invitation from the U.S., according to a statement from a senior North Korean diplomat carried by the North’s state-run news agency KCNA.

In another likely sign that Kim would likely make the roughly 100 mile journey from Pyongyang to the border, the travel group Koryo Tours, which runs tourist trips to North Korea, say on Twitter that the North Korean side of the DMZ was closed to tourists on Sunday. Although it did not give a reason, any visit by Kim would involve massive security arrangements that would almost surely see the entire area shut down to visitors.

“It’s going to be very interesting,” Trump said earlier Sunday. “They want to do it. Chairman Kim wants to do it. I’d like to do it. It’s very complicated from the perspective of logistics and security. Both teams are working very hard, and South Korea is working very hard also.”

The meeting will mark the third face-to-face meeting between Kim and Trump, who made history in 2018 as the first U.S. president to meet with a North Korean leader while in office. Trump’s last summit with the North Korean leader — in Hanoi, Vietnam, in February — collapsed abruptly, with a planned signing ceremony scrapped and Trump explaining to reporters that “sometimes you have to walk.”

At the center of that failure, U.S. officials have said, was Kim’s insistence that all nuclear sanctions be lifted in exchange for only some concessions sought by the U.S. from Pyongyang related to its nuclear program.

In the run-up to Trump’s trip to Japan for the Group of 20 summit and his subsequent stop in Seoul, there were signs that a potential tête-à-tête with Kim could be in the works. South Korea’s president said publicly that U.S. and North Korean officials were holding “behind-the-scenes talks” to arrange a third summit between their leaders, although North Korea’s foreign ministry later seemed to distance itself from that notion by saying that South Korea should cease trying to mediate with Washington.

It’s unclear how much if any progress has been made between the U.S. and North Korea since the Hanoi summit in bridging the serious divides that led to its collapse. Still, the White House has acknowledged that Trump and Kim have continued to exchange correspondence since — messages that Trump has described as “beautiful letters” from the authoritarian leader of the nuclear-armed nation.

U.S. presidents and vice presidents occasionally visit the DMZ, a no-man’s land that includes a designated area where North and South Korean officials periodically have met. Trump had planned to visit during a previous trip to South Korea, but his helicopter had to turn back amid bad weather.

High-level U.S. visits are typically shrouded in secrecy and accompanied by significant security arrangements, with American leaders often holding photo-ops from a vista where they can peer through binoculars at North Korean soldiers not far away.