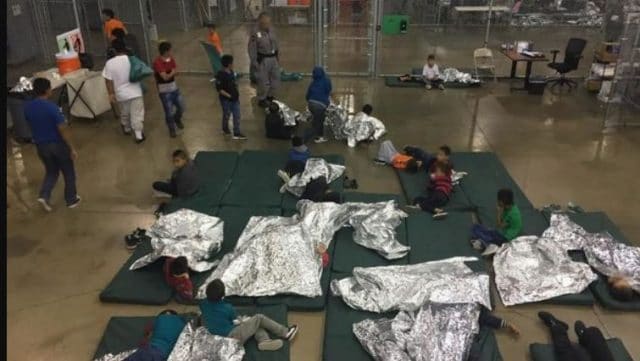 Rep. Judy Chu (D-CA) took to Twitter on Monday to describe the horrific conditions she observed during her visit with several of her colleagues to the El Paso Border Patrol station.

“What we saw was appalling and disgusting,” Chu said in a video posted to Twitter. “We talked to a group of women, detainees who said that they didn’t have running water. One was an epileptic and she couldn’t get her medication. They were separated from their children, they’ve been there over 50 days.”

She added: “One woman said that the Border Patrol agent told her to — ‘if she wanted water, just to drink from a toilet.’ ”

“And we also were there just as a CBP Facebook group posted that they wanted to throw burritos at the Congress members and then had a very derogatory image of one our Congress members, Alexandria Ocasio-Cortez,” Chu noted.

Rep. Rashida Tlaib tweeted: “A father teared up telling me that his wife, 8 yr old daughter & 14 yr old son have been sleeping on concrete floors in a tent for 4 days. They haven’t been able to shower, no real food (chips & juice boxes) & so scared of being separated.”

“Just left the 1st CBP facility,” Rep. Alexandria Ocasio-Cortez (D-NY) tweeted on Monday. “I see why CBP officers were being so physically &sexually threatening towards me. Officers were keeping women in cells w/ no water & had told them to drink out of the toilets. This was them on their GOOD behavior in front of members of Congress.”

She said people were “drinking out of toilets” while officers laughed “in front of members Congress.”

“Now I’ve seen the inside of these facilities,” she wrote. “It’s not just the kids. It’s everyone. People drinking out of toilets, officers laughing in front of members Congress. I brought it up to their superiors. They said ‘officers are under stress & act out sometimes.’ No accountability.”

She continued: “After I forced myself into a cell w/ women&began speaking to them, one of them described their treatment at the hands of officers as ‘psychological warfare’ – waking them at odd hours for no reason, calling them wh*res, etc. Tell me what about that is due to a ‘lack of funding?’ ”

“Now I’m on my way to Clint, where the Trump admin was denying children toothpaste and soap,” she noted. “This has been horrifying so far. It is hard to understate the enormity of the problem. We’re talking systemic cruelty w/ a dehumanizing culture that treats them like animals.”

Rep. Joe Kennedy III (D-MA) confirmed the horrific conditions and noted that Rep. Ocasio-Cortez “refused the rest of the staged @CBP tour so we could talk with 13 detained women in tears over lack of access to medicine, showers, their children & basic decency.”

Rep. Madeleine Dean tweeted: Just left the first CBP facility. The conditions are far worse than we ever could have imagined. 15 women in their 50s- 60s sleeping in a small concrete cell, no running water. Weeks without showers. All of them separated from their families. This is a human rights crisis.”

She added: “We were met with hostility from the guards, but this is nothing compared to their treatment of the people being held. The detainees are constantly abused and verbally harassed with no cause. Deprived physically and dehumanized mentally – everyday. This is a human rights issue.”

Rep. Dean confirmed both Ocasio-Cortez and Chu’s reports that border patrol agents were telling women to drink from the toilets if they were thirsty.