Home Gay Life Trump Compares Melania To Jackie Kennedy: ‘We Have Our Own Jackie O... 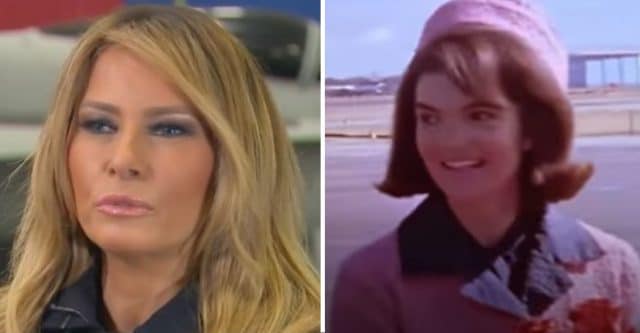 “It was Jackie O and that’s good. But we have our own Jackie O today, it’s called Melania,” Trump said during a phone interview on “Fox & Friends,” explaining his plan to paint the new Air Force One red, white and blue, replacing the baby blue color scheme picked by Kennedy Onassis in the 1960s. The Washington Post on Thursday noted the color scheme is “nearly identical to shades that appear on the jet in which Trump used to fly around the country during his 2016 campaign.”

The president boasted that the first lady is a big hit among his supporters, in part because of how she dresses.

“When I go speak in big crowds — we have tremendous crowds and so many people are holding up banners, you know, ‘we love our first lady,’ ‘we love high heels,’” Trump said.

According to recent polls, Melania Trump’s approval ratings have hovered in the mid-to-high 40s.