Home Gay Life ‘Trump is our president now! Get out of our neighborhood now FAGGOTS!!’ 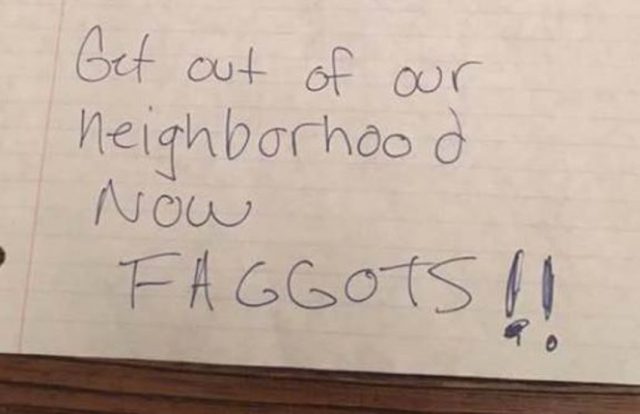 Is hateful note West Virginia gay couple got the shape of things to come?

Kyle Chester and Corey Hurley were awakened by a knock on the door of their West Virginia home at 3 am.

That was followed by the sound of people running away. When they went outside to investigate, the couple found a handwritten note on their porch which read: ‘Trump is our president now! Get out of our neighborhood now FAGGOTS!!’ By the way it’s not the only time when gay couples are attacked this way after election. Anti-LGBT insults were written across one more gay couple’s apartment door in Okemos, Michigan on Friday. And one more case has happened with gay couple’s car that was vandalised lately with homophobic slurs.

Chester posted the note on his Facebook page and it was immediately shared by several of their friends.

‘I get to live in my little shell of “white straight woman” so I get to only imagine what it’s like for people of color and same sex relationships .. but if it hurts this bad just imagining it things with society need to change.’

Chester and Hurley are both 27 and have been together for less than two years.

Hurley is from the state while Chester (pictured below, right, with Hurley) is originally from Kentucky. ‘Sometimes we’d be walking or driving and people yell various slanderous things but we had never experienced anything this direct.’

The couple were already upset and a bit raw over Trump’s shocking win against Hillary Clinton in the US presidential election.

”We waited up all night for the results and were devastated. But I’d come to terms with it and accepted it and figured we have to move forward and keep fighting the fight.’

The couple are planning to get married next year but more pressing is stepping up their activism.

They have organized a meeting at their house to share ideas about how to combat homophobia.

‘I’m floored by how many people have reached out to us. I never expected any other than this.’