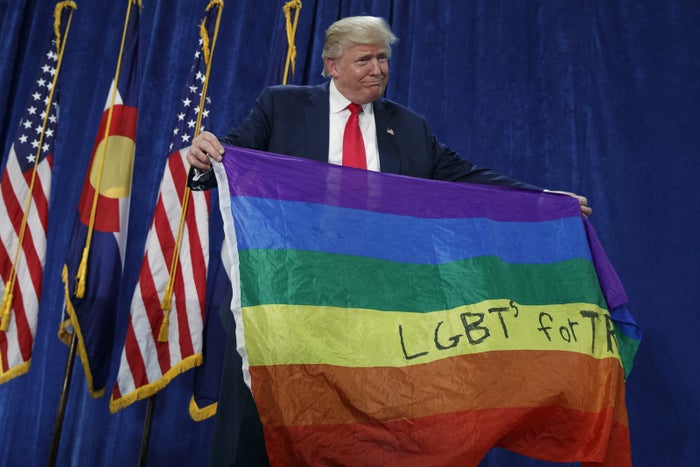 Trump in Colorado during the 2016 election.

President Donald Trump became the first Republican president to acknowledge the LGBT celebration of Pride Month on Friday, even as his administration works to undo and attack the civil rights of the LGBT community.

“As we celebrate LGBT Pride Month and recognize the outstanding contributions LGBT people have made to our great Nation, let us also stand in solidarity with the many LGBT people who live in dozens of countries worldwide that punish, imprison, or even execute individuals on the basis of their sexual orientation,” he wrote in a series of tweets. “My Administration has launched a global campaign to decriminalize homosexuality and invite all nations to join us in this effort!”

The tweet came exactly one week after Trump’s administration unveiled a proposal to rescind nondiscrimination protections for transgender people under the Affordable Care Act. Also last week, the administration finalized one rule allowing medical workers to refuse to treat trans people based on religious objections, while drafting another that would allow homeless shelters to turn away transgender individuals.

During the presidential campaign, Trump presented himself as something of an LGBT ally. “Believe me, I am better for the gay community, I am better for women than [Clinton] will ever be on her best day,” he said in Raleigh, North Carolina, on July 5, 2016. “Ask yourself who is really the friend of women and the LGBT community, Donald Trump with actions or Hillary Clinton with her words?” he said in Manchester, New Hampshire, on June 13 of that same year. He also made history by becoming the first GOP presidential nominee to mention the LGBT community in his convention acceptance speech. Just last week, the president was selling $24 LGBTQ for Trump rainbow shirts to fundraise for his reelection.

Presidents routinely use their executive powers to issue symbolic proclamations to mark days, weeks, or months they deem to be of national value. They can also release statements through the White House press office.

But since he entered the Oval Office, Trump has been silent on Pride Month, not tweeting about it, nor issuing any official presidential proclamations or statements similar to what he had done for National Black History Month, Women’s History Month, Older Americans Month, and Great Outdoors Month, among others. (In 2017, BuzzFeed News asked every single day during Pride Month if Trump planned to acknowledge the month in some way.)

That changed with his tweets Friday.

“Been waiting all my life for a Republican to show this kind of leadership,” tweeted Gregory T. Angelo, former president of the Log Cabin Republicans, a prominent LGBT conservative group. “THANK YOU PRESIDENT TRUMP!”

The group’s new leader, Jerri Ann Henry, told BuzzFeed News via email that she was “thrilled” to see Trump’s tweets, although she has been more critical of Trump than Angelo.

“In his statement, the president mentioned his support of the many LGBTQ individuals around the world who are wrongfully persecuted for their sexual orientation,” she said. “We look forward to working with him to ensure the policies in this country are nondiscriminatory as well.” 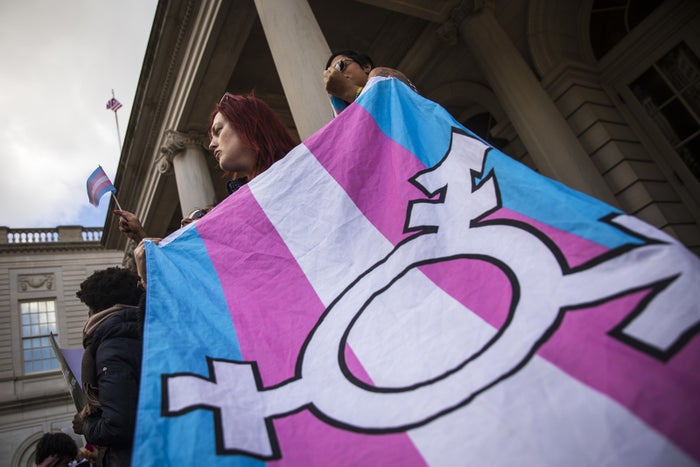 Protesters in New York in October rally against the Trump administration’s treatment of LGBT people.

The White House had no comment when asked by BuzzFeed News on whether the president would follow his tweets with any official presidential proclamation.

In 1999, president Bill Clinton became the first president to issue a proclamation marking June as Pride Month, as he marked the 30th anniversary of the Stonewall uprising. (The 50th anniversary of the event, which kickstarted the LGBT rights movement, is this year.) Former president George W. Bush, an opponent of marriage equality, didn’t issue any pride statements or proclamations during his presidency. But former president Barack Obama began issuing such proclamations when he entered the White House. He also hosted receptions and lit up the White House with rainbow lights after same-sex marriage was legalized.

Although Trump himself hasn’t before acknowledged Pride Month, others in his administration have done so. Just last year, Secretary of State Mike Pompeo issued a State Department statement wishing people a happy Pride, while White House senior adviser Ivanka Trump has also marked the month.

Trump’s Friday tweets referenced his administration’s plans, first reported in February by NBC News, to launch a global campaign to end the criminalization of homosexuality. The day after that report, however, Trump appeared to have no knowledge of the plan when asked by reporters at the White House.

Q: Mr. President, on your push to decriminalize homosexuality, are you doing that? And why?

Q: Your push to decriminalize homosexuality around the world.

TRUMP: I don’t know which report you’re talking about. We have many reports.

After criticizing Trump for refusing to recognize Pride Month in years past, the Democratic National Committee on Friday remained skeptical of his commitment to LGBT rights:

@realDonaldTrump You’ve sought to dismantle nondiscrimination protections for LGBTQ Americans in health care, housing, and employment. You want to define transgender people out of existence. Your record speaks for itself, and a single tweet won’t change that.

In addition to banning transgender people from the military, the Trump administration has said it is legal for companies to fire workers for being trans or for being gay. The administration has also argued to the Supreme Court that it is legal for shopkeepers to deny service to LGBT individuals if they have religious objections. Among other actions, the president has also retracted a proposal to count LGBT people in the census.

In March, a Trump official told the Washington Blade, an LGBT newspaper, that the administration also opposed the Equality Act. The bill, which would amend the Civil Rights Act to prohibit discrimination against the LGBT community, passed the Democrat-controlled House this month, but is not likely to receive support from Republicans in the Senate or White House.