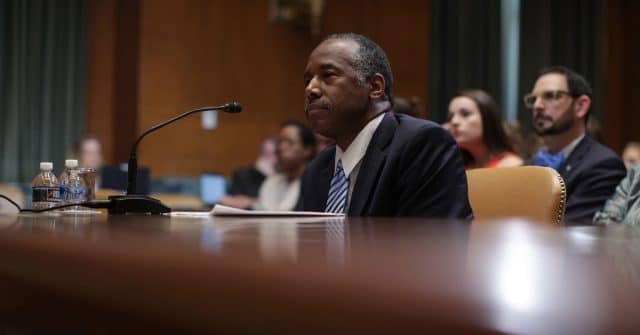 Trump’s Secretary of Housing and Urban Development Ben Carson had denied lying to Congress about a plan to gut protections for transgender homeless people.

In a reversal of Obama-era policy, Carson published guidance on May 22 that would grant homeless shelters the right to refuse gender-appropriate housing for transgender people.

However, just one day before the rules were published, Carson had appeared before Congress and denied that he had plans to change LGBT+ discrimination rules.

On May 21, Democratic Rep. Jennifer Wexton challenged Carson about whether he would eliminate protections for trans people, and the official responded: “I’m not going to say what we will do in the future about anything… I’m not currently anticipating changing the rule.”

Speaking on Fox News, Carson denied that he lied to Congress about the impending plan to change the rule.

Asked whether he lied, Carson said: “I don’t think so… The rule [about discrimination] from 2012 is not in any way being altered. The rule for 2016 has had some additions made to it.

“But it appeared to me that she was asking whether we were going to eliminate the prohibitions against discrimination against LGBTQ community and we would never do that.”

In fact, Wexton had pressed Carson about “any current or future plans to eliminate the equal-access rule.”

Wexton has called for Carson to resign.

She said: “As a former prosecutor, I take Congressional testimony very seriously.

“In his testimony before Congress, Secretary Ben Carson lied to me and the American people about his plans to allow discrimination against transgender Americans seeking access to life-saving shelter.

“He lied again when he called me the next day to ‘clarify’ his testimony. He has proven himself to be deceitful and inept as Secretary of the Department of Housing and Urban Development.

‪“He is unfit to serve and should resign.”

Speaking to CNN, Wexton added that she had pressed Carson on the issue initially because Democrats “suspected he may be making changes” to gut LGBT+ protections.

She said: “He lied to my face, and the very next day HUD announced a rule-making that would basically gut the transgender protections.”

Wexton dismissed suggestions that Carson failed to understand the question, adding: “It’s pretty clear that he intentionally lied to me.

“The question was clear, he volunteered that he did not anticipate making changes to this rule, and then went and did it the very next day.

“Nearly one-third of the trans community will suffer from homelessness in their lifetimes, and before the rule was promulgated, one in five shelters turned transgender people away. This is going to impact the community and could even cost people their lives.”

Carson has a lengthy anti-LGBT record.