Home Gay Life Trump said: Transgender people can use whatever bathroom they want 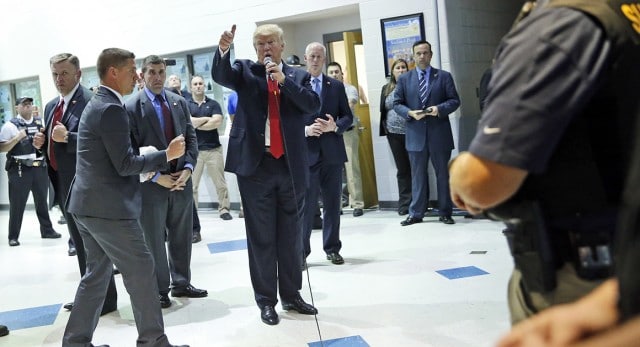 Transgender people should be able to use whatever bathroom they want, Donald Trump said Thursday.

“Oh, I had a feeling that question was going to come up, I will tell you. North Carolina did something that was very strong. And they’re paying a big price. There’s a lot of problems,” the Republican presidential candidate said during a town hall event on NBC’s “Today.”

Referring to comments from an unnamed commentator who on Wednesday said North Carolina should “leave it the way it is right now,” Trump said he agreed.

“Leave it the way it is. North Carolina, what they’re going through with all the business that’s leaving, all of the strife — and this is on both sides. Leave it the way it is,” he said, referring to companies that have canceled plans to move or expand businesses in the state as a result of the law, which bans transgender individuals from using a bathroom that does not match their gender at birth.

“There have been very few complaints the way it is. People go. They use the bathroom that they feel is appropriate,” Trump said. “There has been so little trouble. And the problem with what happened in North Carolina is the strife and the economic — I mean, the economic punishment that they’re taking.”

Matt Lauer then asked whether Trump has any transgender people working for his company.

He added, “You know, there’s a big move to create new bathrooms. Problem with that is for transgender, that would be—first of all, I think that would be discriminatory in a certain way. That would be unbelievably expensive for businesses in the country. Leave it the way it is.”

The reelection campaign of North Carolina Gov. Pat McCrory fired back at Trump after his remarks on what a spokesman called the state’s “common sense bathroom privacy law.”

“Governor McCrory has always said that North Carolina was getting along fine before the Charlotte city council passed its unneeded and overreaching ordinance. Now that it has been overturned, businesses can adopt their own policies – like Target has – instead of being mandated to allow men into women’s restrooms by government,” campaign spokesman Ricky Diaz said in a statement. “Where the governor disagrees with Mr. Trump is that bathroom and shower facilities in our schools should be kept separate and special accommodations made when needed. It’s just common sense.”