Home Gay Life Trump Supporter Admits There Is Absolutely Nothing Trump Could Do To Lose... 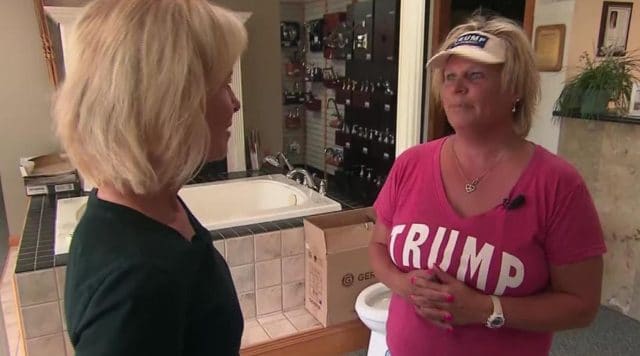 CNN’s Randi Kaye interviewed two Eau Claire, Wisconsin residents who supported President Trump in 2016 to see who they are supporting in the 2020 election.

Kaye began by asking the coworkers about Trump’s racist tweets telling four congresswomen of color to “go back” to their “crime infested” countries.

Kerri Krumenauer, an employee of Wiersgalla Plumbing & Heating Company, defended the president and rejected claims that his attacks are in any way racist.

“How is it racist?” Krumenauer asked.

“If you don’t like this country, get out,” she declared. “Leave!”

“He didn’t use any names — they stood up,” she falsely claimed. In fact, Trump did target specific congresswomen at his rally by name.

“So that’s all they did, they made themselves look like idiots,” she said.

“We’re back in charge again,” she added.

“Is there anything that Trump could do that could change your mind or are you dug in?” Kaye asked Krumenauer.

“You are on the Trump train,” Kaye suggested.

“I am on the Trump train. I am in the front car with him pulling the whistle,” Krumenauer agreed.

Asked if he would support Trump again in 2020, Dave said: “Absolutely not!”

“Cuz I don’t want to have another four years of embarrassment going on,” he said.

While he did not agree that Trump’s tweet attacking the four congresswomen was racist, he did say “it is a hatred tweet for sure.”