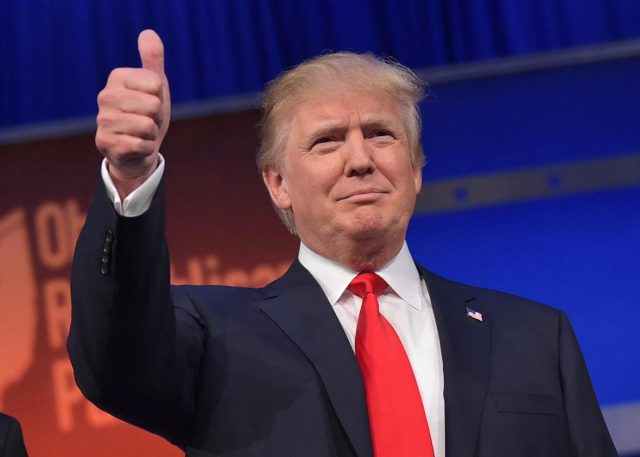 While Trump tried everything in his power to roll out a newly empathic and huggable persona at the Detroit Electronic Club on Monday, anyone with even the vaguest semblance of human consciousness could easily see through the ruse.

The abrupt about-face is doubly transparent when you consider the Republican presidential nominee and crepuscular gasbag plans to attend a fervently antigay event being held this week in Orlando — exactly two months after the Pulse nightclub shootings that killed 49 people and left dozens seriously injured.

As Right Wing Watch reports, the humanoid helping of Kraft Macaroni and Cheese plans to join Florida Senator Marco Rubio and a rogue’s gallery of antigay heretics and cackling skulls in cloaks at “Rediscovering God In America,” sponsored by something called the American Renewal Project, which aims to “mobilize conservative Christian viewers and inspire right-wing pastors to run for elected office.”

David Lane, the founder of the group, told Bloomberg News‘s Jennifer Jacobs that he expects to quiz Trump on how, exactly, he plans to battle the “homosexual totalitarianism” sweeping the land and how one should quash all those namby-pamby gay rights “militants.”

As you may have gathered by now, Lane doesn’t like gay people. In fact, he predicted that “homosexuals praying at the Inauguration” in 2012 would inspire “car bombs in Los Angeles, Washington D.C. and Des Moines, Iowa” due to God’s general pissiness towards gays and that the “pagan onslaught” of the gay rights movement is gonna lead to the full-on, totally hardcore destruction of America.

Other moldering ghouls planning to intend: Mat Staver of Liberty Counsel, who recently said memorials for the victims of Orlando were simply “homosexual love fests“; Republican Party activist David Barton, who famously holds the opinion that HIV/AIDS is nothing but God’s “penalty” for homosexuality; Maine pastor Ken Graves, who is against gay marriage because he feels gays are too “depressed” to build happy families (isn’t everyone?); and Bill Federer, a conspiracist who is certain gays want to usher in an Islamist takeover of America.